Technology. It can make life seem a little bit of a frazzle sometimes (and I ain’t talking about those little delicious bits of bacon flavoured future cancer enhancers). I spend all day working in digital and as exciting as it is to be working at the edge of an industry that hasn’t even learnt how to crawl yet, sometimes it leaves me craving the real. The ever elusive nature that my generation wants to feel, but has no idea how to really get. I talk about it with the Podcasting Bro boys and we plan to go camping in the Alps. We don’t go. I talk about it with my cycling buddies and we talk about giving it all up to live in North Yorkshire giving rich locals cycling workshops. But we stay sucking that corporate teat. I endlessly retweet Cabin Porn. From my Macbook.

But recently I discovered something beautiful. Something that makes me feel all zen and gooey inside. I spend all day thinking about my next one, and as soon as it’s over I need a shower. And I first got in to it because of the Internetz. Nah, bro, it ain’t what you think it is. It’s running.

I’ve tried several times in my life to get into running. To get that buzz that THOSE smug bastards say they get from putting in kms. The addiction, the endorphins and the better outlook on life. Several times I’ve come to the conclusion that it’s utter bollocks and the lying bastards are making it up. My experience with running was a miserable slog of unbearable boredom that wasn’t as fun, beautiful or sociable as cycling. No one enjoys it, they just pretend they do cos everyone else says they do and Nike told them to. It’s the Emperor’s new clothes of fitness.

That’s what I used to think. And then on the 4th of November 2013 at at 18:58 I embarked on my next big try to love running. But this time I was armed with Technology…and this time something changed. 28 Minutes and 5kms later I came back, not having set the Track & Field world on fire by a long shot…but with a good feeling in my legs, lungs, heart and head. And it was all because of 2 apps and an iPhone.

That first night I used a combination of apps, one called ‘Moves’, one called 10K trainer. This combination was key. ‘10K trainer’ is an app that gives you a solid 14 week programme (3 runs a week) to build up to a decent 10km pace. The programme is varied, focusing on speed work and gradually increasing distance, but more importantly gets you out of the door (the hardest bit) 3 times a week. Moves, in my opinion is even greater. From a professional point of view, it’s one of the best designed fitness apps out there. One simple purpose and a beautiful interface. It’s tracks your daily movement (walking, cycling and running) and presents the live data to you via 3 coloured balls that increase in size the more work you put in. Simple. Basic even. But my gawd those 3 coloured balls become your everything. Each day you want to have bigger balls than the last (wayooooo), each week you want to see those records come tumbling down. You’re 5km away from smashing your monthly all time running record? Better get out and put some pace down in the park.

I quickly learnt that was the key to running joy for me, healthy competition with myself. I set myself a goal (run a 10km in 50mins by New Years day) and began putting in the work to get there. Night time runs, 3 times a week, no one to judge my progress but me, but nowhere to hide from the data. Tangible proof of what needed to be done, but also what was happening to me. I also read somewhere around the same time that the key to routine is trigger and reward. In my case that trigger was a special Running only beanie hat placed on the radiator nearest to my door (so when I got home it was the first thing I saw and acted as a prompt). The reward was a self celebratory Instagram, a hot bath with a Rogan Podcast and a chocolate milk before bed. YOLO innit bruh bruh.

The speed of improvement shocked me (something I would later pay for…but we’ll get to that). Putting in 3 solid runs a week meant that I was actually putting in 10kms way before week 14 at a pace of 5.28 per km , not going full Mobot or anything, but not too bad for someone who had never really done more than a couple laps of the park before. So I was forced to give up the ‘10K Trainer’ and move onto something else, the amazing ‘Nike Running’ app. BRO! Now, at this point, I would like to declare that I’m a Nike head. I don’t wear chains that excite the feds (instead opting for an understated St Christopher, which as far as I’m aware has never elicited any kind of reaction from the constabulary), but I am most definitely a Nike head. I run in bright red Gyakusou for Gods sake. I’m that guy, and I can only apologise (I’m actually not that sorry). So there may be some bias, but MY GAWD the ‘Nike Running’ app is delicious. It just gets it spot on. It knows running inside out and serves it’s purpose perfectly. I usually hate branded apps. The majority are poorly thought out agency wank fests designed to show the board that the company is really serious about “moving forward in digital”. But Nike gets it just right, It’s a service for runners, and you never ever feel like you’re being sold to or overly, aggressively branded. The ‘Nike Coach’ feature is a tough bastard though…defo competitive Dad syndrome there…chill out digital pops, I need a rest day BROSEPH!

Anyway, with the introduction on regular pace checks, carrying on with 3 runs a week, some solid 90s NYC Hip Hop Playlists and an Instagram image to keep up, I hit my 10km goal pretty quickly. 22nd of January to be exact ( a little later than my original target date – but manna man was surfing in Portugal for New Year, ya get me?!). A mere 11 weeks after I started running I was running a distance I wasn’t sure I would be able to at a pace I was more than happy with.

And getting faster still. Now, I’m well aware a 50 min 10km is hardly up there with Tarahumara in term’s of running achievements, but it was a goal for me, and more importantly one I met. It showed me the possibilities of work and reward. It opened up the possibility of Half Marathons and maybe even one day the NYC Marathon….something I had never been able to conceive before. It’s also made me much happier, more relaxed, better at my job, friendlier with people and more confident. Sorry for the cliches, but it turns out they’re true. For me at least. 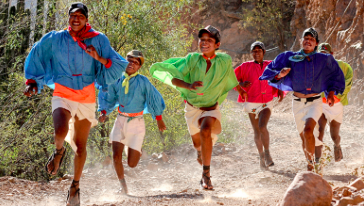 It’s not all be plain sailing though. In typical me fashion the small victory of hitting my goal inspired me to think that I was now one of the great distance runners of our time. Steve Brofontaine. So 12 weeks after my first run I decided, armed with a Duncan Trussell podcast and the Nike Running app I was going to run a half Marathon distance on a sunny Sunday. And I was going to do so at a pace of 5 mins per km. On my own. Of course what actually happened was that at exactly 12.2km in my left knee blew. Twang. Wobble. Pop. No power. Can’t put foot down. Can’t lift foot up. Stop. The quickest route home was 3km and with no money in my pocket I had no other choice but to run/crawl the rest of the way home. Which obviously didn’t help matters. It had completely escaped my attention that you are actually supposed to build up to distance and vary your workouts with strength training and interval training. I could already hear my friend Sean shouting at me. “SQUATS BRO”. So that was me for a few weeks. Back to cycling and swimming. Leg presses and Bulgarian split squats (Thanks for that particular tip Sean, my internally bleeding muscles will be forever grateful). It’s been a quite a few weeks now since the knee went, and I’m only just now starting to put in a decent pace and get out regularly again (just tonight putting in a 5.08 per km run). But what I have been able to do is rely on technology to help me track my linear brogression back to where I want to be. And I’m gonna keep on pushing through.

So even though my constant exposure to digital can sometimes make me feel far, far away from the ‘real’ I crave and leave me wanting an indefinable something else, it has undoubtedly and undeniably helped me fall in love with something that makes me feel happy and helps me look into myself to find out what I’ve got in me, and what I can achieve. It’s introduced me to like minded people with similar journeys around the world (via the #nikeplus hashtag) who offer virtual support after each and every run. It’s taught me how to repair my damaged knee and how to improve my diet to give me the energy I need to get out 3 times a week. It’s taught me which shoes I need to decrease the chance of getting injured again and it tells me mid run, when I’m grinding teeth that I’m not doing as bad as I think I am. Ellie Goulding even gave me automated props for “putting in more work this week than last”. Nice one Ellie. Still think your musics a bit shit like.