Christmas is mega. It was probably a bit more mega when you were a kid and you didn’t have to really do anything other than turning up on the big day and getting kiddy turnt up on joy. The sum total of your responsibility was placing a Mince Pie on a novelty plate for Santa the night before.

But even as an adult it’s still pretty mega.

However it can be a difficult time to stick to regular running. There’s just too much booze and mince pies and films to consume.  And it’s cold. And bed is warm. And what about those mince pies tho???

Don’t worry, this year the good people behind Advent Running have your back. They have a simple plan, and is often the way with simple plans, it is pure genius.

This Chrimbo they want you to run 25 times in 25 days, challenging you all to run a minimum of 30 mins every day between the 1st and 25th December. Oh yeah….they’ll be spot prizes for the best photos, video or written description of the day’s run shared by you on Facebook, Instagram or Twitter with the #adventrunning.

It’s completely free and the beauty is anyone, anywhere can do it. There’s a challenge set up on Strava if you want to log your runs during the challenge, but equally you can also just give your self a pat on the back and a glass of chocolate milk (and a mince pie) safe in the knowledge that you’re giving yourself the present of radness this year.

For those of you in London, there will be a kick off party on the 1st December at Cat & Mutton, Broadway Market E8 4QJ.

It’s gonna be tough…but it’s not impossible and it will get you in the shape of your life ready to start 2015 with a BANG.

So, go smash some Mince pies, safe in the knowledge that you’re just carb backloading for tomorrow’s run.

You can find out more about Advent Running here and check out there social profile’s below. 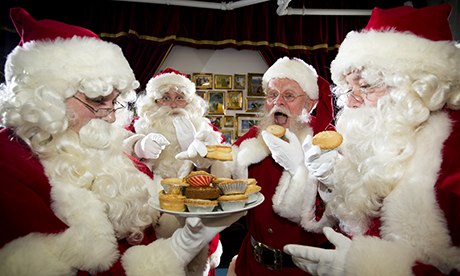