Home / News / Story / My Year in Running: Hackney Half Marathon

June 2014. Half way through the year. After the achievement of setting a PB in the Wimbledon Half it was time to take on the Hackney Half Marathon, the spiritual home of the world famous Run Dem Crew.

With the sheer amount of crew love (both runners and cheerers) around the course I had lofty hopes of improving upon my Wimbledon time of 1:48 and putting in a solid 1:45. However, during Wimbledon, I had gained an unwanted and noisy friend…an angry IT band. I rested up for a few weeks post Wimbledon and finally gave in (why does it always take us all so long to seek professional help?) and went to a local physiotherapist who quickly diagnosed me with ITBS or runners knee as it’s more commonly known. The Physio gave me a set of stretches and exercises to do everyday in order to build up my core and help with the issue, along with a few sessions of acupuncture, voodoo doll style

After  a few weeks of treatment it quickly (and frustratingly) became apparent  that it wasn’t going to be right for the run, but I was determined to compete as the crew vibes were so strong and I had been looking forward to running this half for a long time.

My Physio and I spoke about what could be done to help get me through, Kinesio tape was suggested alongside  popping some Ibuprofen prior to running. I have heard so many different points of view on taping , but was happy (or desperate) to give it a go. I am still not 100% sure if it has any scientific benefits, but am fairly sure it does have an effective placebo effect.

The morning of the race arrived, and having celebrated my girlfriends birthday the night before I wasn’t in the greatest of shape. At around 8am I reached the start and the sun was already beating down. This run was not going to be easy!

The familiar pre race awkwardness and nerves. The internal countdown. Then 5,4,3,2,1…we’re off!

As with a lot of mass participant races I started slowly as there was no space, but after about 3k that gaps appeared and I got into a decent rythmn. I was soon starting to feel the heat effecting me and was searching for the first water station, finally it arrived, like a mirage, and was given a pouch with much need H20 inside. Having not seen one of these pouches before, I put it in my mouth and squeeze. Only a little came out. I squeeze harder. Disaster.  The whole pouch burst.  Water everywhere, most of it on the person behind me  (not that they minded) hardly any went in my mouth, luckily for me the person beside me saw this and handed me what they didn’t want.

After about 7km I started to see fellow crew members, experienced runners, suffering on the side of the road. When this happens you STOP without question to make sure that everything is ok. No questions asked. Crew comes first, it’s more important that any selfish notion of a goal time.  It was also at this point I decided that I would walk when necessary. I didn’t want to end up like so many people I saw getting medical treatment. There will always be another race.

10km came and my IT band flared up and made it perfectly clear he wasn’t happy. I continued running and mercifully saw fellow Pavement Bound member Tilly on the side of the road suffering from cramp. I helped her stretch and she was ready to continue… BUT it was when I stopped that my knee seemed to lock and I found it very hard to get going again. I hobbled for a bit and managed to get it going again.

It was about this point in the course  that I heard noise of large, unholy, biblical, ground quaking proportions. Noise of such magnitude could only mean 1 thing……...CheerDemCrew was near!!! Boy was it needed. I was flagging big time. The picture below of Tilly and I with big smiles on our faces is a lie….I say confidently for the both of us that a minute before our faces looked totally the opposite. 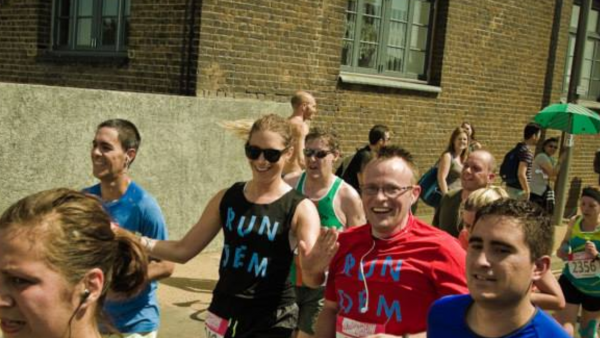 Soon after Cheer Dem I knew that the finish line wasn’t far away. The finish line was now less than 1km away and I started to feel good enough to battle through the pain and forced myself to finish in style, the 21st km was completed in 5:51, 2 whole minutes quicker than the 17th,18th and 19th kms. Ok it did help that the final stretch before returning into Hackney Marshes was downhill but I still had to do it. I crossed the line in 2:07:55 and I was well and truly shattered!!

This year Hackney and myself will reacquaint ourselves, and unfinished business will be taken care off. 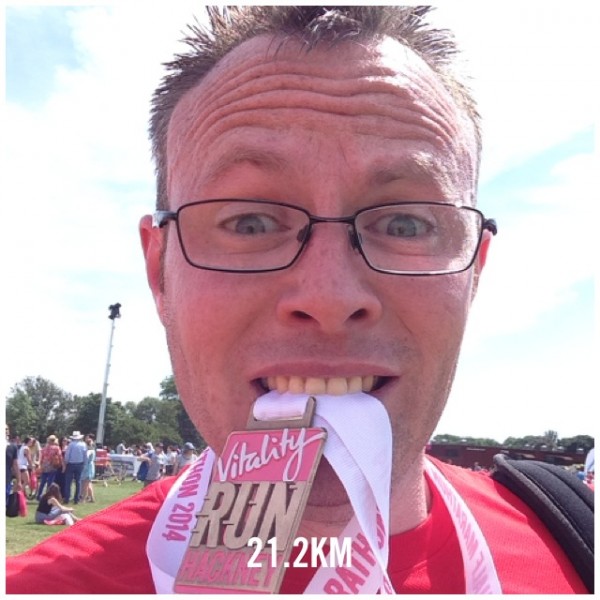 Next time, part 4 of my year of running, is a trip up to Edinburgh where I competed in the Scottish Half Marathon with a friend of 20 years, I couldn’t wait!