Home / News / Story / My year in running – Wimbledon Half Marathon

After the highs of completing my first half marathon in Berlin it was time to do a half closer to home, the Wimbledon Half Marathon in leafy South West London

One thing that has surprised me since I’ve started competing  is how expensive some races are to enter, so I decided to do some research into finding races that were healthy for my wallet as well as my body. Fortunately I stumbled across Run Through, a small group of people that organise affordable events in and around London TARN, which is where I stumbled across the Wimbledon half. Womble style.

Race day came and my alarm was set for 6am . On a Sunday morning. Yeah.  My kit bag was all packed the night before but I still couldn’t help double checking before we left. An unusually prompt train journey and  a £20 taxi ride later (the start line ended up being quite a bit further away from the train station than i had anticipated) and I was chilling in the queue for the coffee van when I hear “good morning number 3 son” … my Mum had arrived to offer some support (and counting tips) so to add an extra layer of soppiness to the day,  my girlfriend not only gets to watch me run but she also meets my wonderful Mum for the first time. Enough to make Uncle Bulgaria shed a tear.

After a some hellos, a few kisses a few nervous deep breaths on the start line and some self doubt about that coffee (hello Paula Radcliffe) WE’RE OFF.

I’d done some research and was safe in the knowledge that all of Run Through’s events  start on grass and after 100 meters or so move over to the familiar sound and texture  of concrete. However 1 mile passed,  then 2 miles, 3 miles…still the route is trail. Suddenly I realised I was actually running a trail half!!! After 4 miles I was enjoying running on through  the common, my legs felt good and I was on pace for my much wanted time of 1hr 45.

6 miles in and all was still well, I had plenty of space around me and was in a good rhythm… well, thats until a marshall decided his phone was more important than directing runners and a handful of us went the wrong way which as you can imagine annoyed the @%&@ out of me. Not much I could do about it so took a deep breath, counted to ten and tried to get my legs going again. Luckily the next bit was down hill. 11 miles in and the uneven trail has started to take effect on what I thought at the time was my left knee, I could hear the music playing at the finish which kept me going. The final stretch was in sight, 300 metres or so uphill on grass. I get to the final straight, push hard and see the time on the clock has alreday passed 1:45. A little deflated I sprint to the finish line where I see the best 2 woman in my life( that IS the last of the soppy stuff) I cross the line in 1hr48:48 which in hindsight I was very happy with as it took a fair chunk out of my Berlin time and it was a BLOODY TRIAL RUN!

2 hours later I’m home and soaking in a bath (thats a nice thought for you isn’t it) but can’t get out and not because my Matey bubbles are just too tempting….my knee was shagged! It turns out I had enraged my IT band, which I can only assume had been caused by running on an uneven trail, even if it isn’t the reason I’m still blaming that.

Things I’ve learned from this half.

Next time in my ‘Year in Running’ series I take on first ever Hackney Half. Read how I recover from my IT band injury as I take to the mean streets of East London to compete in a half that my running FAM the RunDemCrew took over big style.

That’s it from me for this year though, as I need to go and buy a couple more presents before heading to Paris for Christmas. 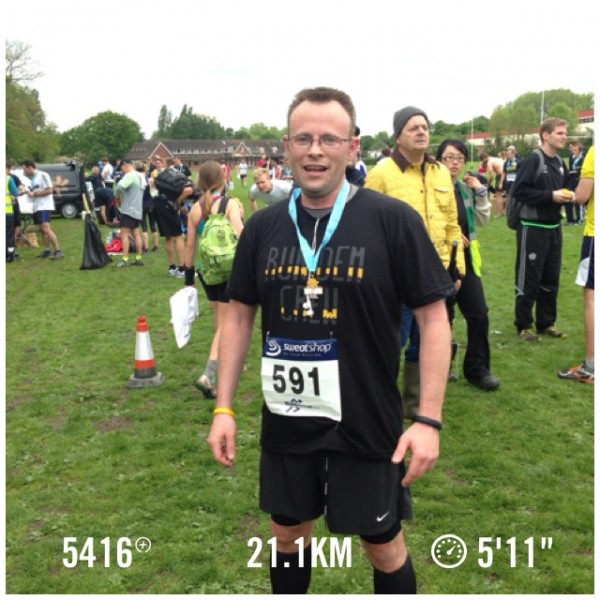