Home / News / Story / My Year in Running: Scottish Half Marathon

The Scottish Half Marathon (in one of my favourite places, Edinburgh) was a great opportunity to fit one more half in as my first year running was drawing to a close.

I’ve been to Edinburgh many times, mainly to go and watch rugby and have a wee few drams. They are usually messy affairs with one of my best buddies Stevie. I have known Stevie for over 20 years and we have forged a great bond over the years, he has also completed in a few full marathons himself including London and New York, I was chuffed when he said he would also run the Scottish Half with me.

I first met Stevie when we both worked at the then “World’s Finest Sports Store” Lillywhites, at that time running wasn’t ever on our minds, more like how many pints we could drink on  a night out and still be at work the next day. We are now older and wiser but still enjoy a drink together when we can. 10 years ago Stevie moved up to Edinburgh, a few years later got married. He me to be an Usher at his wedding which, being a Scottish Wedding, meant I would be wearing a kilt. And yes I was a true Scotsman for that day!!! Over the next few years Stevie and his wife had 3 children, combined  with a new Sports Massage Therapy business Feel Fit Therapy Stevie’s spare time is very limited but when I spotted this half marathon I had to get him involved, I was  very pleased when he said he would run, it also meant that I had a place to stay, nothing like an a hidden agenda…

The Friday before the run, my girlfriend and I flew up to Edinburgh, and were greeted by Stevie in town.  A quick walk to his house and it wasn’t long before the woman had wine in their hands and we had a beer in ours. I was assured that this particular beer had good properties to it so I didn’t feel guilty. After a couple it was bed time!

I woke in the morning to the sound of his 3 young children (sounded like loads more) . Coffee on the kitchen table and porridge on the stove. I’ve never really been a fan of porridge but I’m told its good munch prior to running so, after covering it in honey, I worked my way through it.

Stevie and I said goodbye to everyone and made our way to the start. Stevie was aiming for a quicker time, so we were split up and I started getting focused on my own race. The start was staggered, so I was able to get straight into a good rhythm  without having to bob and weave out of the way other runners.

3 miles in and I am way ahead of my target mile pace,  but I felt good so I continued running based on feel (predictably, this would later come back to kick me up the backside).

I entered the stage of the run I was I was dreading…15km of coast  to one side, dense greenery to the other. Hardly any cheering support. It’s impossible to over estimate how much  at times like  this,  you really appreciate people’s cheers and encouragement. If you don’t run you must cheer…

Suddenly I saw Stevie, around 3 miles ahead of me. Seeing someone I know gave me the boost I needed to keep going. Mile 10 came and went, my pace had dropped and I was now getting a pain in the ball of my right foot. I tried to run on the grass at the side of the road to cushion the impact of my (ahem) portly frame. I had to stop, the PB wasn’t going to happen. I had gone out far to quickly  and I was now paying the price.  My foot was hurting but I took a second and was determined to not let it beat me.  Suddenly I heard someone say “Keep going pal you’re nearly there”  this was it, just what I needed. I kept going and soon the finish line was in sight. I could hear the music playing, that crowds  gathering along the street. I took my headphones out to feed off the great vibe and  summoned up the energy for one last push to the line.  No matter what condition I am in at the end I always finish with a  sprint. I heard one person shout “Go Run Dem” I had no idea who it was but it brought a smile to my face. I crossed the line bang on 2 hours, not the time I wanted but I had finished my forth  Half marathon in 6 months, not bad for my rookie year!

I met up with everyone after getting my medal (along with a decent goodie bag) and we headed back home for a shower and some sleep before the essential burgers and beers.

A month or so after the race I receive an email from the organisers saying that the course was actually overly long by 350 metres?!! It didn’t really bother me that much though,  as I had now run more than 13.1 miles and mentally that has started me on the journey to the infamous 26.2 . 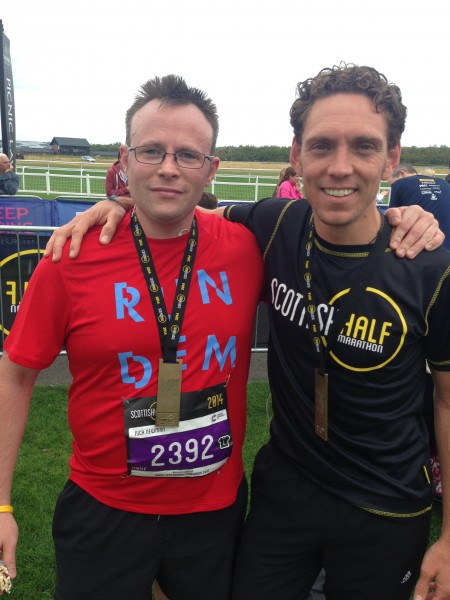 So my debut year as a runner come to an end. The highs of going to my first “Bridge the Gap”event in Berlin. Running local races in leafy Wimbledon. It’s all taught me that there is no point letting things that you cannot control get in your way. I am the healthiest that I have ever been(still enjoy a fews beers and food that I probably shouldn’t eat) but with the amount I run I can justify it.

A marathon will happen at some point. When and where I do not know…yet. 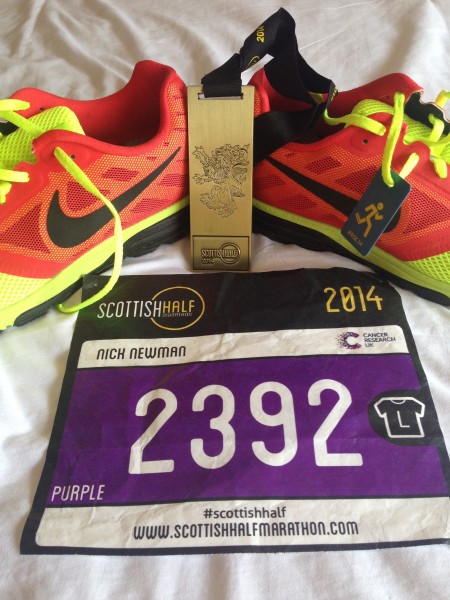