At the End of 2014 I set myself 2 new running goals; a Sub 22 min 5K and a Sub 1:45 Half marathon. With 3 half marathons booked before the end of May 2015 there wasn’t going to be a shortage of runs to achieve the second of my goals. The First opportunity was the inaugural  North London Half Marathon on the 15th March.

A day or 2 before the race I found out that a group of fellow RunDemCrew family members were going to pacing the masses, and I was pleased to discover that I had Danny and Cynthia as my target time pacers, I found them in my start pen and I knew they had my back. I purposely started in front of them so I knew that I would stand every chance of hitting my time. The race was started by non other than Mo Farah and of course as everyone ran past him they had to do the MoBot.

The race started down hill and I soon got into a nice rhythm, one that would continue for the vast majority of the race. 5km passed easy and with it the first water station, but with it not being warm I gave that a swerve and continued, nestling into my nice settled rhythm. I have learnt that I can run for nearly an hour without a drink if I have hydrated properly leading up to a race (this is of course race day weather permitting). Also at roughly the same point of the race was the first dose of the legendary CheerDemCrew who gave me a polite “Good Morning” to let me know that they would be there on my way back! The first of the uphill climbs arrived but I powered up, even though I shorten my stride going uphill I do try and not to slow down, if anything I speed up a bit, one benefit of living in Crystal Palace is that there are plenty of hills for me to run up! The next water station arrived and this time I took a bottle, took in a few sips, poured some over my barnet (pun intended) and took another gulp then discarded it, somehow managing to launch the bottle into another runners back, oops! It happens.

Soon I coudl see Wembley Stadium in the distance meaning that I was at the half way point. As we entered the stadium through the East Gate we were greeted by a Brazilian band who were so loud you couldn’t help but speed up a bit or there was every chance you would end up deaf! Suddenly, in one of those surreal race moments, I was running pitch side at Wembley! It seemed very strange seeing it so empty but it was still thrill to run through. I think every single runner took a selfie whilst running through. I left the stadium happy that I was able to run through Wembley but now the second half of the run had to be focused on. A quick  glance at my watch and I was still on course for my goal time. The kilometres started to tick by and soon I could hear noise, and by noise I mean NOISE, I was approaching CheerDem for the second time and now that the local residents had woken (I hope) I knew it was going to be loud. I took the bend at the end of a nice downhill stretch and saw that the crew had grown in size from morning and the noise was immense! Not being the smallest of people my red RDC top was easy for Cheer Dem to spot. 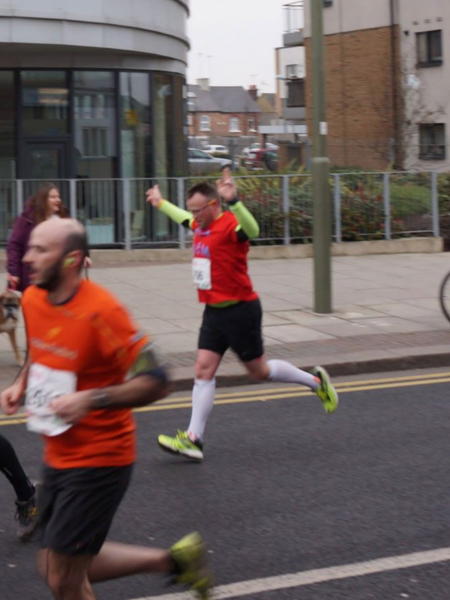 The noise levels raised again if that was at all possible and I flew past them without a care in the world, the look on the other runners faces was hilarious, ” what the F was that all about” I heard one say, my smile got bigger! Never, Never, NEVER underestimate having people support you during  long runs, what it does for you is amazing, the 17th Km was my quickest(4:38) in the run, that speaks volumes!

With the finish now only just over 3km away I heard my name shouted out and turned around and I see Danny and Cynthia about 20 metres behind, I had begun to slow but just to hear them behind me gave me the nudge I needed to dig deep and push for the line, I took it up a gear and began passing people that had been in front of me a while, I could hear the music and could now see the stadium and now I was picking up momentum, my last 4k splits were, 5.05/5.04/5.02 and 4.43, I entered the Stadium and sprinted for the line, stopped my watch and see the time 1:44:41, I had achieved one of my goals of 2015, I was grinning like a Cheshire Cat!! I collected my medal and goodie bag, gave Cynthia a hug and a kiss, Danny only got a hug and went off to the Brooks stand to collect my bag. They asked how I did and they could tell by my face I had achieved what I set out to. What’s next Aisling asked, I said retirement!! We all know that wasn’t going to happened, I thank the guys and girls at Brooks for looking after my bag and for the shoes which I had just set my PB in and to coin another brands saying “Money, its gotta be the shoes” 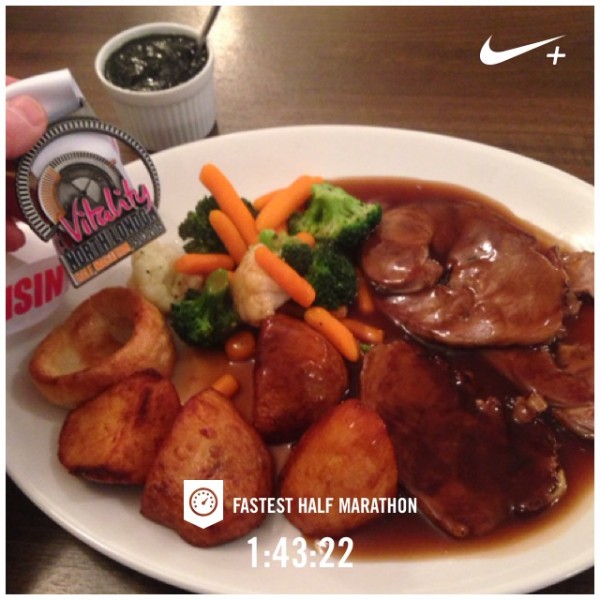 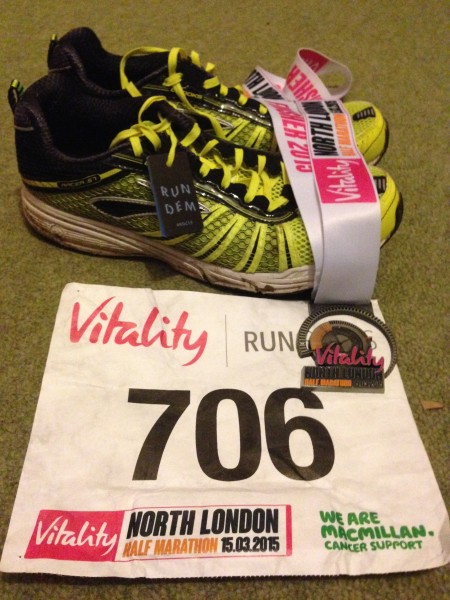 Next up is the Hackney Half at the end of this monyth,  when I will be taking up unfinished business from 2014 with the streets of East London…