The 1988 100m final. Probably the best Olympic 100m final there has ever been in terms of star power, anticipation, spectacle, showmanship, character and controversy. Which, let’s face it, is what we all want from the greatest sports show on earth.

But, that leads to all kinds of difficult questions, because the 1988 100m final was undeniably dirty. Ben Johnson may have had his gold medal striped off him whilst the rest of the field languished in reflected, secondary, glory but in the 26 years since the race the majority of that star studded line up has tested positive for drug offences in some way or another. A sign of those specific times, or something more sinister in nature?

Equally, the eventual winner of that race (after Johnson’s disqualification) was Carl Lewis…although he clearly stepped out of his lane 2 or 3 times, which should have resulted in automatic disqualification before Johnson even peed into a test tube. But didn’t.

Daniel Gordon’s enthralling documentary looks at the legacy of all of this. The events that led up to that specific moment in time, the 9.79 seconds that had the world holding their breath and the subsequent fallout from Johnson testing positive for anabolic steroids.

For the first time ever, all eight athletes who ran in that infamous race tell THEIR story…and for the fan of the 100m Olympic final, this is THE story. Even if just for the look of incredulity on Lewis’ face as Johnson crosses the line…easing off…fist in the air.

Watch the full documentary above, and prepare to get pyshced about those Thursday night track sessions. 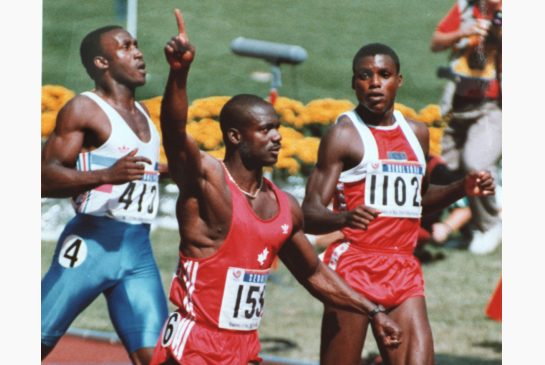