As 21st Century citizens, we’re no-strangers to the topic of ‘body image’. For a lot of us, it’s plays a significant role in our daily doings – and by that, I don’t mean that we’re all vain and self-centered beings, but rather the high level of expectation placed upon image and presentation in the modern world mean that it’s hard to get anything done without looking the part.

You’d think that being an active member of the general fitness community (and I use that term loosely when talking about myself) would provide a wholly different perspective, but in reality gym-goers, lifters, and road and track athletes alike simply embody all of the physical extremes that we seem to aspire towards; even within the ranks of the considered ‘elite’, the demons of physical perfection are seemingly difficult to out-pace.

So, my question is this: In a time where ‘strong is sexy’ and ‘real women have curves’, who is standing up for happiness and well-being? Who is doing their bit to promote fitness for function as opposed to looks alone? 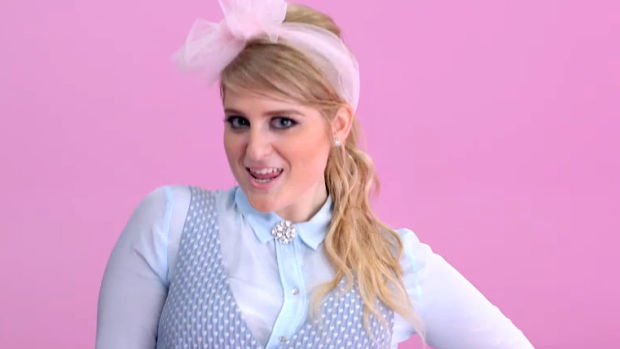 Anyone who is burdened by the incessant rapture of Top-40 focused radio, as I am from the hours of 9-5 Monday through Friday, will have done well to avoid Meghan Trainor’s smash-hit ‘All About That Bass’. If you are one of those lucky few, then I’m sorry to burst your bubble, but it might help if you have a listen here.

The irritatingly catchy tune broke records as the ‘first UK Top 40 entry to be achieved entirely by streaming data’, and in the process pushed a completely disingenuous message of body-positivity down the throat of women all over the world.

Despite the uplifting nature of the song, and it’s initially positive message being one of self-acceptance in a world where unrealistically high standards make us all naturally below-par, ‘All About That Bass’ destroys those ideals through it’s childishly defensive lyrics.

In Trainor’s words, you CAN still be happy about your body if you’re not a size two, but ONLY if you have a sufficient booty to compensate, or are in some way anatomically larger than the ‘skinny bitches’ she condemns. Your alternatively-beautiful features will mean you are STILL attractive to men, so that’s all good, because if all else fails, you can always just put down other women about THEIR bodies so that you can, in turn, feel better about your own… Job done.

It might be the force-fed nature of her body-positive message that gets to me – the one that feels distinctly like PR disguised as social commentary – but it’s the gaining of a following through co-option that does the real damage at the other end. It simply flips the existing format to push a particular school-of-thought that makes one percentage of the population feel great about their bodies at the detriment of the rest. 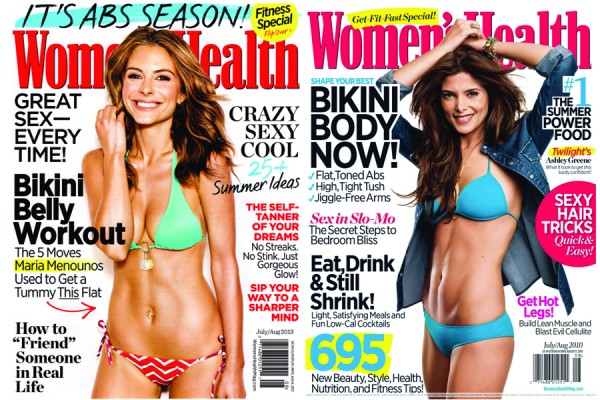 The same misguided body-positive message exists within the fitness world too, only this version is on steroids – pun intended. Fitness model and motivational speaker Tosca Reno raised concerns in a piece for the Huffington Post stating that the body-ideals posed by fitness and health magazines were not only dangerously unattainable but also rather missed the point of fitness and health in the first place, merely becoming part of the problem themselves by wrongly reaffirming that aesthetics should be the primary goal of fitness as opposed to being a harmless by-product of functionality.

Phrases like ‘Strong is the new sexy’, ‘She squats bro’ and ‘Strength vs Cardio’ form the headlines of memes that gather immeasurable kudos throughout the realm of social media, gaining ‘likes’ by the thousand as new #fitspo accounts continue to come out of the wood work adopting the same polluted message – motivational mantras plastered across often misappropriated images. The same redefined set of physical ideals – abs, quads, glutes and ‘thigh-gaps’ at the top of the agenda. One state of perfection simply replaced by another.

Sports like Crossfit (an increasingly popular sport, despite the controversy that surrounds it, that promotes functional fitness through a broad programme of training focussing on compound strength and conditioning movements) fall victim to this same social-media driven #fitspo co-option due to the fact that the sport’s poster boys and girls seem to accidentally adhere to the same Adonis expectations that we, the general public, have of high level athletes.

When fitness and health magazines act as the entry point to running, and weight-loss is the topic in question, the same thing tends to happen and the misinformation continues. “What’s better for me?”, Joe and Jane Bloggs will ask, “How can I burn fat, build muscle and look good?”. The predicted analysis follows: High-intensity fitness versus distance running. The sprinters body versus the marathon runners body. Two immeasurable physiques built through training for very specific events versus what the general public considers to be more attractive. Fitness for aesthetics wins again… 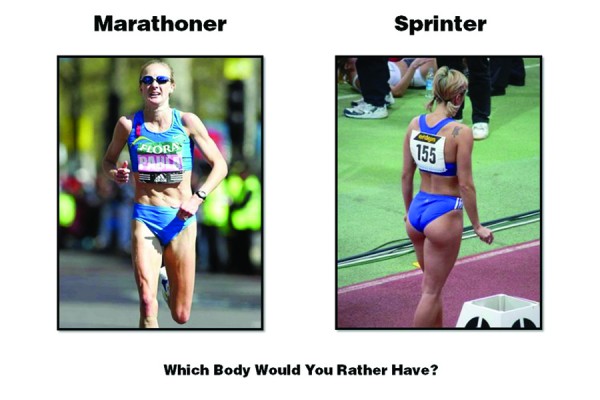 The painful reality is that this is the current nature of the fitness industry, and there is very little that we can do to change what is promoted via mainstream media outlets in a very image driven society. There is even less that we can do to change the New Years day gym-subscription-boom that continually fuels this poorly monitored annual delivery of fitness misinformation. However, as the popularity of running and social media outlets continue to climb, we do have a responsibility to do what we can, and if we can make little ripples in our own immediate communities then it’s worth a try.

My opinion might be biased, and sound a little self-righteous, but when it comes to fitness for the right reasons, running crews are getting a lot of things right. While you do have to be careful to take what you see within the social media sphere with a pinch of salt, once you get beyond the pressure to don the latest swoosh innovation you’ll realise that there is very little (if any) reference to body shape at all. In fact, it’s one of the first fitness communities that I have experienced that seem to publicly unaffected by it. Anyone fresh to the #BridgeTheGap movement will quickly see their social media feeds flood with encouragement and positivity as newcomers swiftly rise from humble beginnings to half-marathon medals.

Advent Running was a London based initiative, globalised through social media, that took this format and reinvented it, inspiring hundreds of people dust off their running shoes and commit to 30-minutes of fitness a day in the run up to Christmas. Again, the result was an explosion of social media activity that promoted happiness through accomplishment, where movement was the primary goal and a boost in morale was the reward.

As active runners and social media users, we are automatically ambassadors for the sport, whether we want to be or not. As soon as we start to talk about running, we become ambassadors for fitness, for health, and have an inherited responsibility to know-it-all. So – THINK BEFORE YOU SPEAK. Whether you’re a running coach, a qualified PT or just the casual-est of casual movers, consider how your words and pictures impact on those around you. It is our responsibility to ensure that it’s the latter part of this movement that takes precedent – The one that encourages happiness through movement and movement alone, and for no other reason. 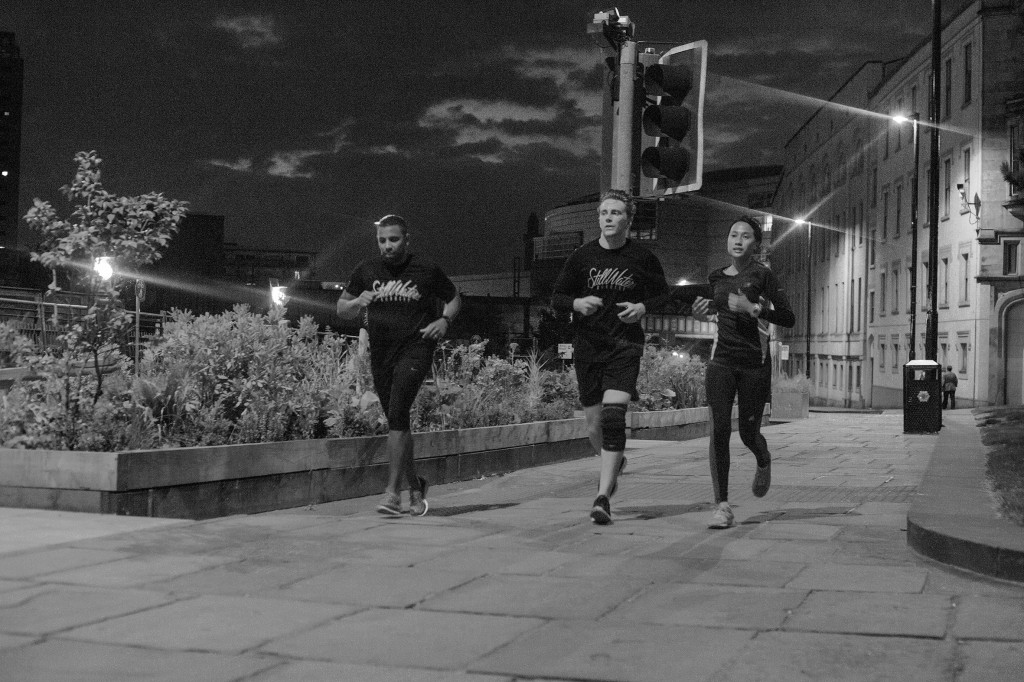 In an ideal world, women (and men) wouldn’t have to worry about being ‘perfect from the bottom to the top.’ It’s about time we made that ideal world a reality, where we can spend more time worrying about what we are doing with our lives, for the benefit of our health and well-being over the appearance of our bodies.