I am always on the hunt for the perfect running shoe for my needs , could the Nike Lunarglide 6 be it?

Up until I started using the Nike Zoom Fly  I was very happy with the performance of the Nike Lunarglide 5, the only thing that I wanted was a softer forefoot with perhaps a zoom air unit to give the ball of my foot a little more protection.  I only really felt a little uncomfortable on my longer runs of 15kms or longer so overall I couldn’t really fault it. I had heard that the Nike Lunarglide 6 was going to be softer so had to give it a try.

For the first time in the Lunarglide series Nike have done away with the traditional flex grooves found in most of their shoes (Pic below) I suppose these flex grooves are a very simple way of showing how the foot flexes in a linear motion but the foot works in a three dimensional way so do the basic groves actually provide a natural range of motion? Will the Lunarglide 6 be the most flexible support shoe yet? 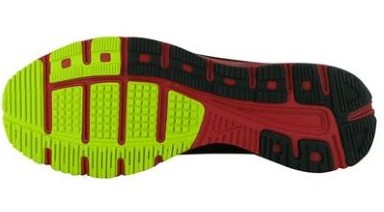 Looking at the above picture you will see a number of red grooves, these are the flex groves to allow the outsole and ultimately your foot move in as natural way as possible. You will see one groove running from heel to toe and 4 grooves running across width of your foot, the forefoot is where you need good flexibility otherwise you would find your foot fighting against the shoe. Now this has been replaced by Pressure Paths (pic  below) , these paths have been created by using pressure mapping, something new for the Lunarglide 6. 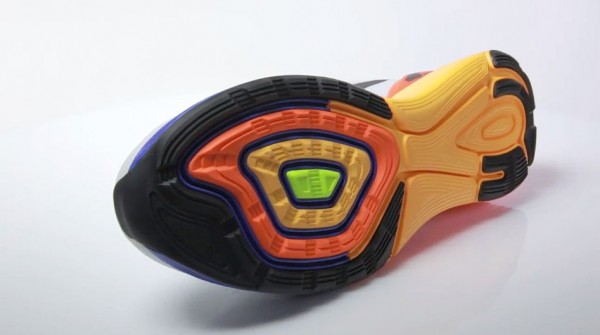 For me the midsole is where all the juicy techy, geeky stuff is housed. Although Nike have kept the popular Dynamic Support system they have updated it. You still get the support  where it’s needed but you now have a softer forefoot. In the Lunarglide 5 the firmer foam actually ran the full length of the shoe which in turn created a shoe that was unnecessarily stiff.  The new tooling features a 2 piece dual density midsole to create a softer and more responsive ride. As per previous models phylon (grey midsole section in below image) is featured on the medial side of the shoe where the support and stability is needed during foot strike, the biggest change is the cloud like Lunarlon foam (white midsole section in below image) which is located on the lateral side and the forefoot which not only creates a softer forefoot but a more resilient and responsive cushioning through transition. 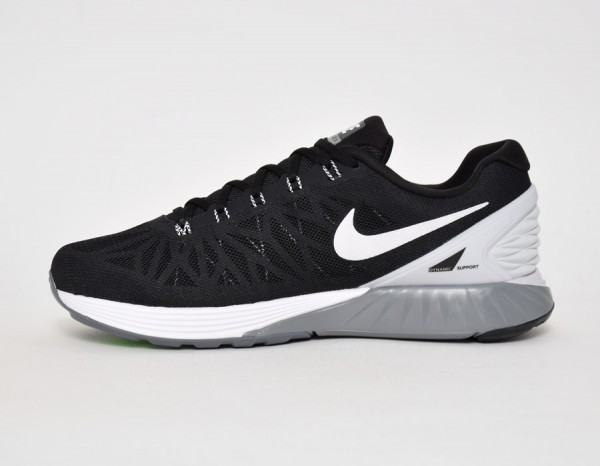 For the Lunarglide 6 the upper features engineered foam with perforations for added support and ventilation, you also have the Dynamic Fit technology which features flywire cables which are linked though the laces in order to get a glove like fit. Inside the upper you also have a bootie which creates a seamless fit in order to cut out any areas of irritation caused by stitching. The heel clip has also been updated to provide added support

My view on the Nike Lunarglide 6

As soon as the UPS delivery driver arrived and I ran upstairs sidestepping the dog and hurdling the cats like a child who had just got the latest computer game only what I had just received meant me spending time outdoors over hours in a bedroom.

Initially thought was that they were nice and light which is always a bonus and I’m sure Nike Co-Founder Bill Bowerman would agree. Once on foot I found the fit to be perfect. Once the run started I noticed the softer forefoot and smoother heel to toe transition straight away and was certainly happy with this. I do get a little bit of soreness under the ball of my right foot every now and again and the softer forefoot did help this. The upper with the dynamic fit and updated heel clip held my foot in place on the midsole perfectly.

I have also done a 10k run in them and benefited from the softer forefoot, so if I am comparing them to the LG5 they are a good improvement in the areas where I wanted improvements the most. I do think that I will have a greater opinion once I have run a bit longer in them as I’m having get used to using a shoe with a higher profile midsole compared to the Zoom Fly, a shoe I have run 4 half marathons in since the 30th March.

Finally if your still awake here are some pictures of the shoes in question to show you that I have used them and not just writing the above from a tech sheet!

Bye for now and Happy Running!

Please note that these are my views and in no way suggesting that they will be suitable for everyone.