When it comes to fusing headline-grabbing performance innovations with style, a biased view might be that none do it better than the swoosh… Whether you’re a Nike fan or not, though, you’ll have a hard time denying their increasing influence over the streetstyle trends dominating the outfit selections of catwalk and fashion week regulars – after a bit of digging, you’ll soon see that every other snapshot features a pop of the infamous volt colourway, or some HTM or Flyknit variation…

One of Nike’s most notable pop-culture-infiltrating success stories, though, is that of Nike Flash – a collection of footwear and textiles designed to bring visibility to the forefront, utilising highly reflective design detailing to deliver unparalleled visibility and water-resistant fabrics to fight the cold snaps and soggy seasonal downpours that we traditionally face this time of year. As disappointingly practical as that all sounds though, Nike’s trademark design finesse means that the resulting collection is nothing less than a show stopper… 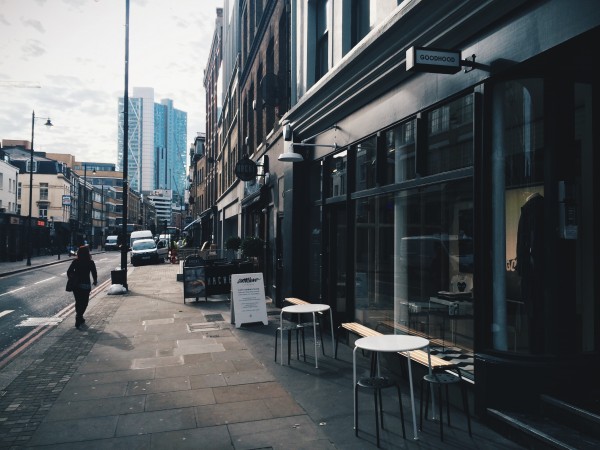 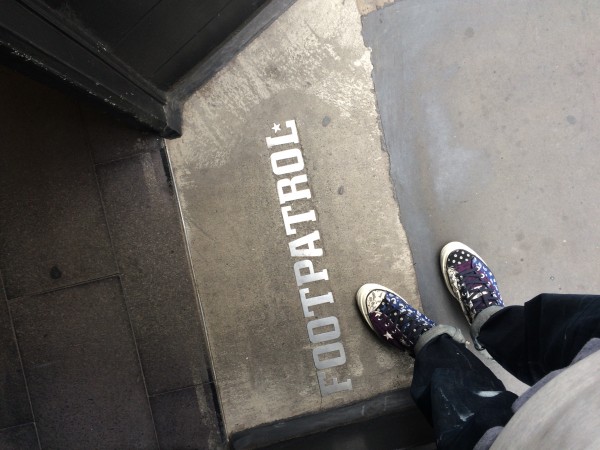 Nike reached out to the Still Waters family, kindly inviting a few of us friendly Northern folk down to London to experience the collection first hand. I made the most of my time, took an afternoon off work and paid the usual suspects a visit (Soho’s Footpatrol, and the newly opened Goodhood store on Curtain Road) before heading to a secret location for the evenings event.

After a quick name exchange at the entrace to Holborn Studios, I was lead down a dark and winding corridor, guided by the sounds of space aged music that seemed fresh out of an 80’s sci-fi flick – it was immediately clear that tonight was going to be all about the experience. After a sharp right turn, the scene changed dramatically and we emerged into a large open room, thick with smoke and alive with frantic lighting that threw shapes against facing walls. The three long rails that suspended from the ceiling provided the center piece, each rail showcasing this season’s Nike Flash range, hand selected and curated for each attendee, each outfit identifiable by our initials stamped to the back of a personalised drawstring bag. 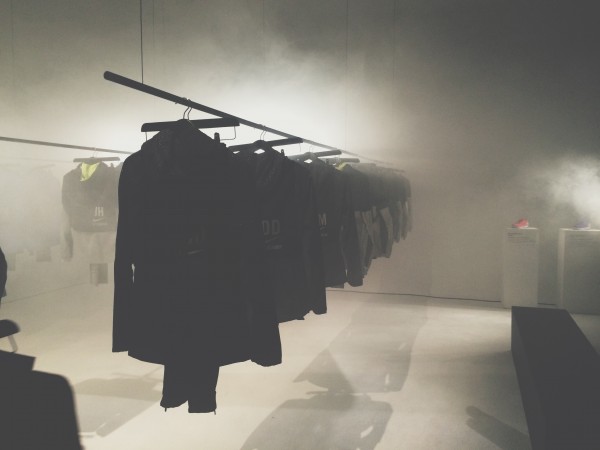 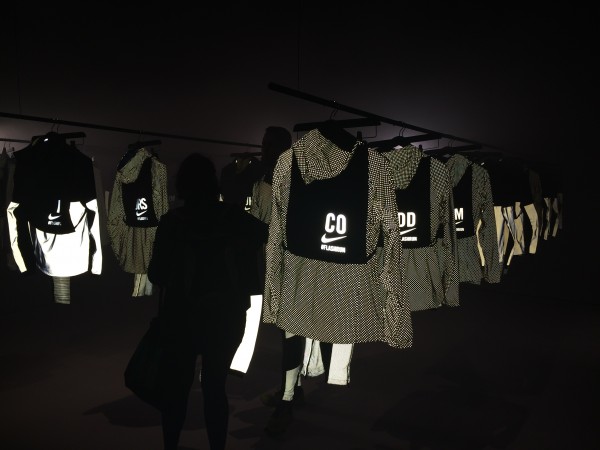 A few moments later, I was changed, and finding my feet as a dynamic element in the studios interactive exhibition. “Follow me”, instructed Sam, one of Nike’s leading digital marketing speciliasts. “You’re going to like this”, she explained as we ducked through a connecting doorway and made our way towards the main visual element of the evenings agenda.

The smoke died down, and the atmosphere transformed from eery to rave in an instant. A DJ-booth manned by Fat Buddha Yoga founder Jessica Skye spanned the far wall, but the gaze of the early arrivers was focussed on the photo-booth-inspired installations to my right. The two-forward-facing television screens in the middle of the room acted as the view finders for the trigger controlled digital cameras that pointed towards the parallel structures at the other end – 8-foot-tall blocks, mesh lined, three dimensional in nature, and fun as hell to wave between. Groups took it in turns to throw shapes, interacting with the structures in order to challenge the Flash properties of their clothing, individually posing for photographs that showcased the creative design and blinding potential of the Flash technology. 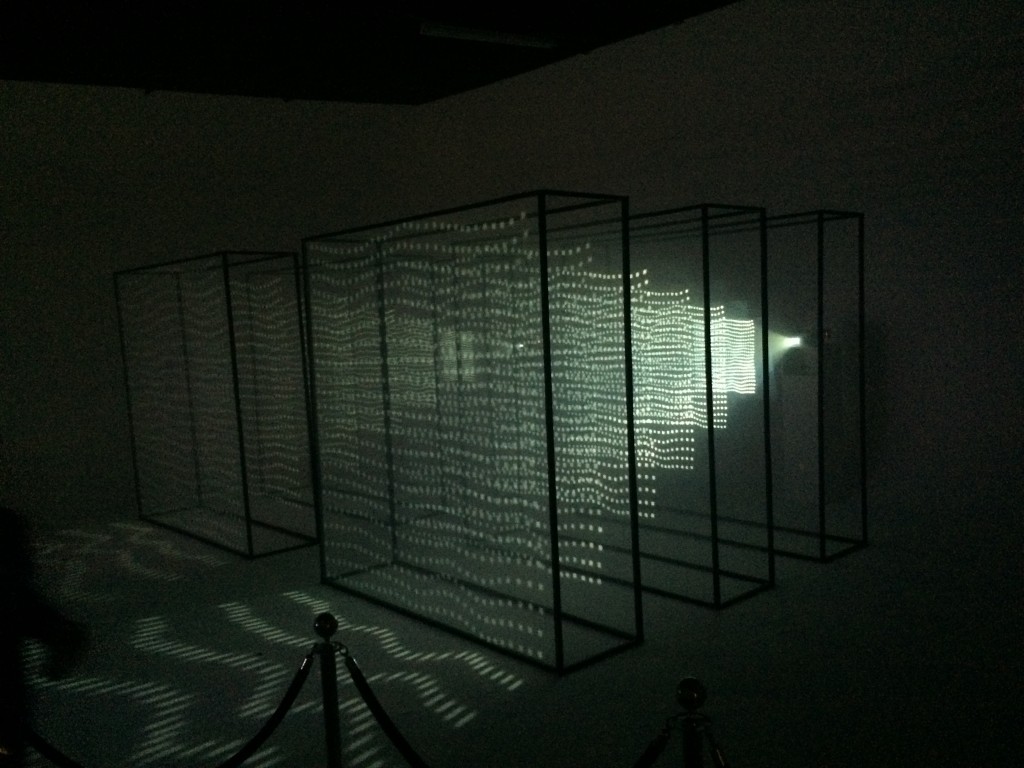 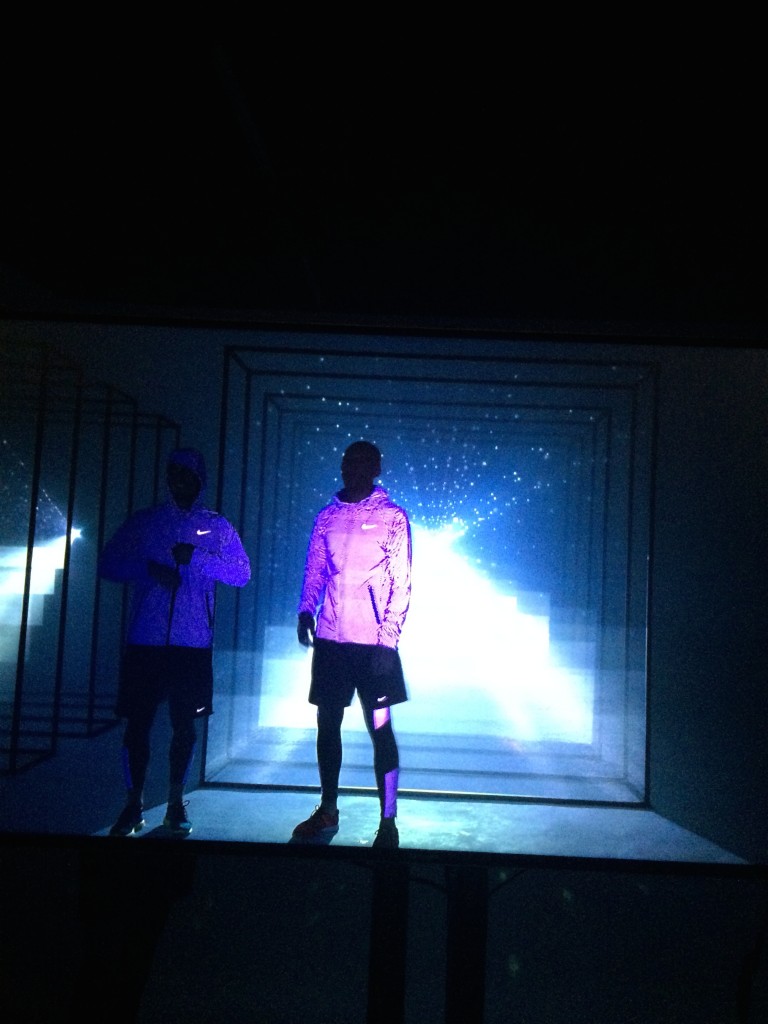 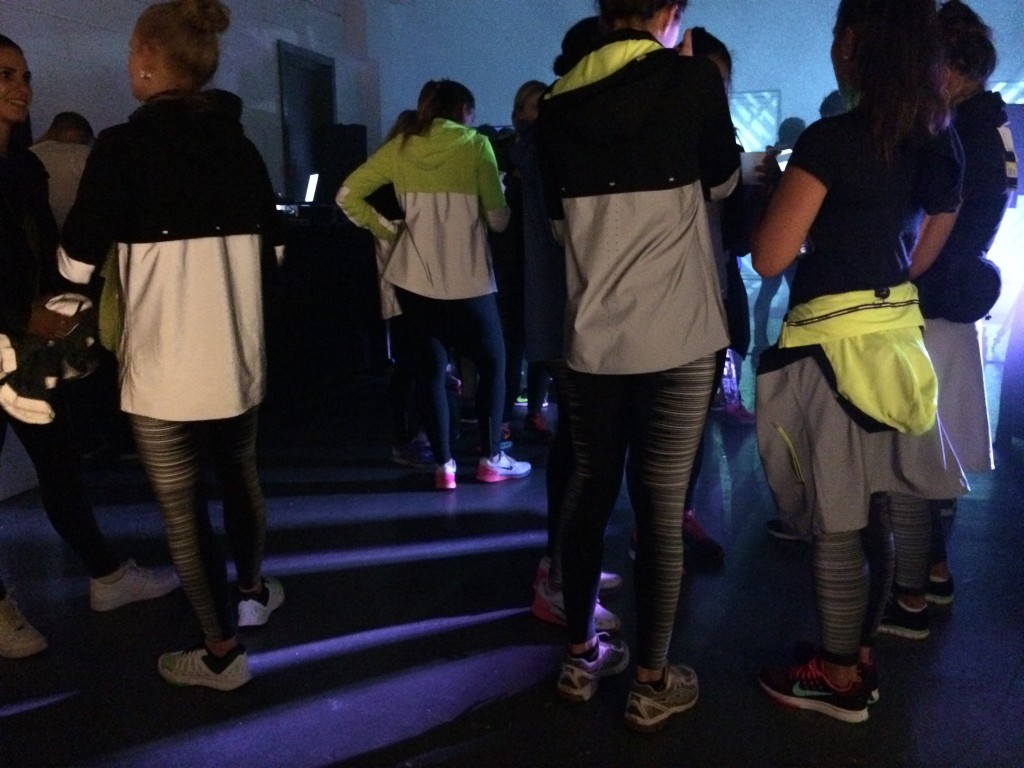 But it’s not all pretense. The email invitation that preceded instructed that we ‘arrive ready to run’, so a few minutes later the Nike+ run leaders are walking us through tonight’s East-London focussed route and the impressive features that our newly-donned Flash gear will add to this otherwise rainy run – enhanced visibility, durable Storm-Fit fabric blocks, bonded seams, laminated vents for breathability… 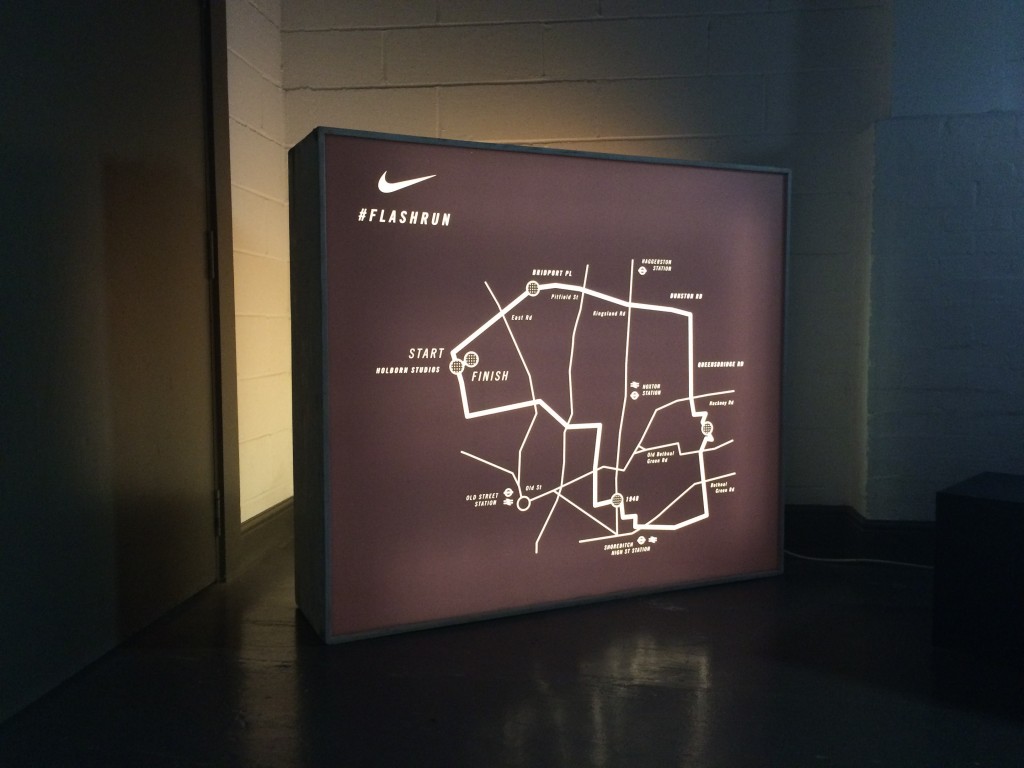 But one last instruction: “Does everyone have their phones?” our leader shouts, followed by nods and murmurs. “Good, cause there will be some designated photo points along the route, so keep those cameras at the ready”. That’s more like it.

We kick things off canal-side gliding. Loud calls of ‘BIKE’, ‘BRIDGE’, and ‘BOLLARD’ warn the runners behind to watch their step. The rain falls light on us tonight, and the a mild temperature means that we’re quickly comfortable in our stride, snaking our way around East London via pre-determined pit stops.

An i-Phone sized cut away in the rear side of the Flash Running tights keeps my phone in place while the pace picks up – an essential design feature when meeting the needs of a 21st Century runner. 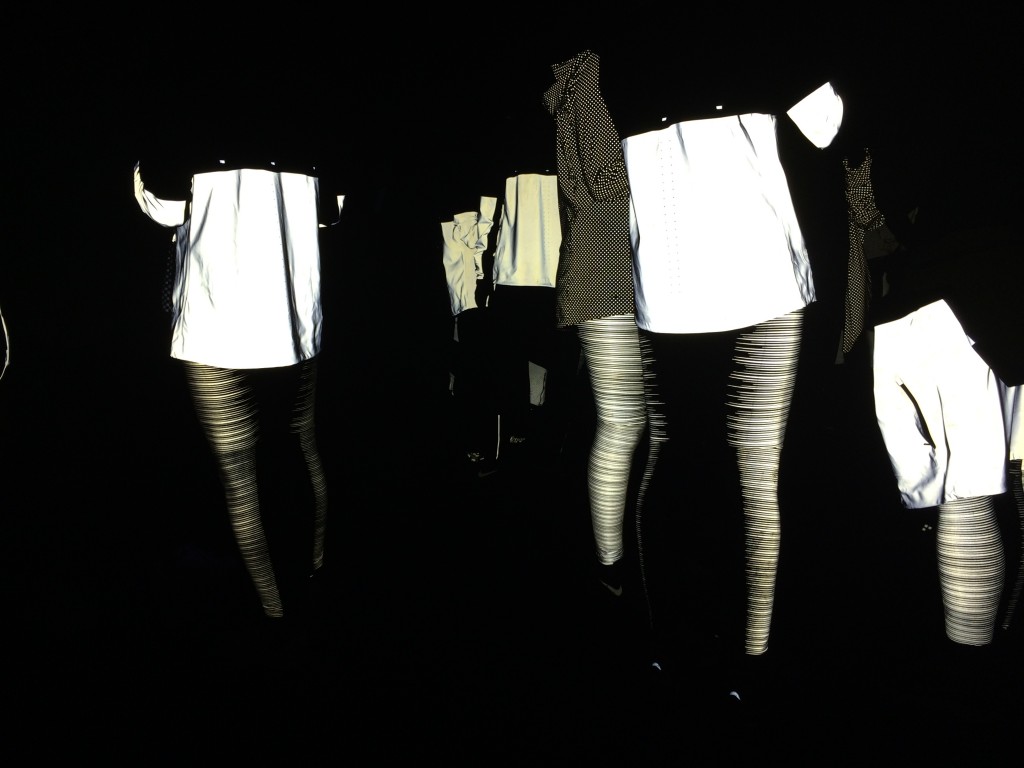 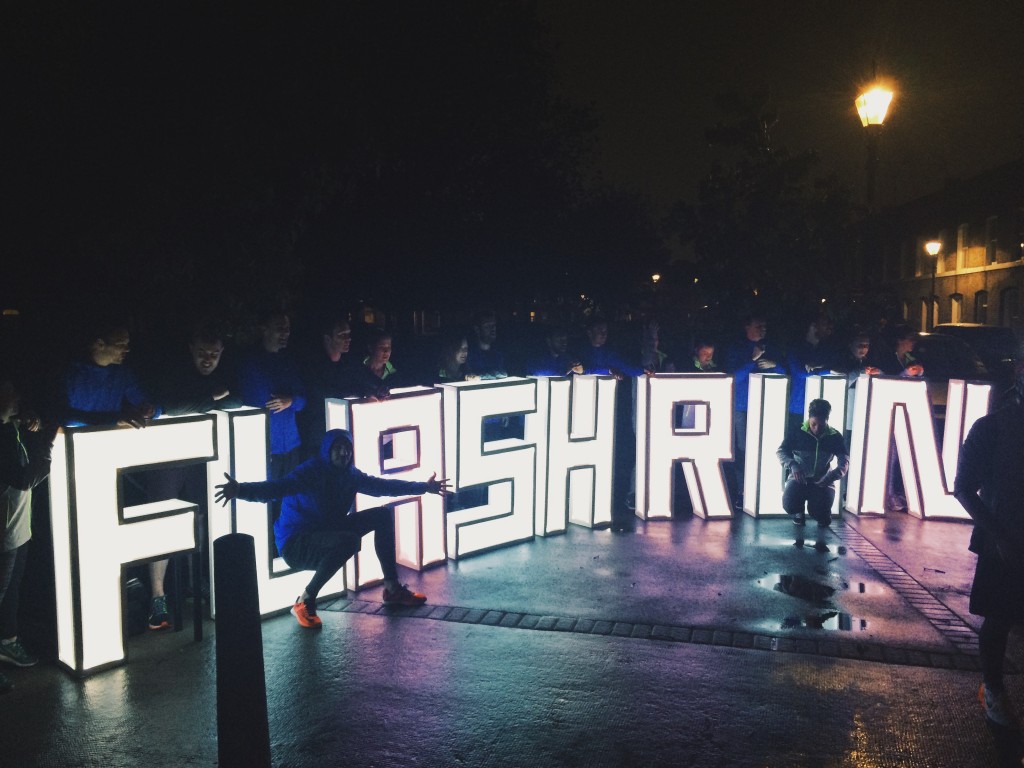 What’s a run these days without a photo-op? If instagram doesn’t know about it, then it more or less didn’t happen. It’s the world we live in, whether we like it or not, and Nike know exactly how to bring out the worst in our social-media driven habits.

A few hundred or so selfies and crew shots later, and roughly 6.6km of pavement pounding and the night comes to a close. After a quick snack provided by the ever impressive Spook, we’re heading back towards Old Street, already working through our favourites from tonight’s Flash-snapshots, and lighting up our social feeds with bursts of white against the black night’s sky.

One more for the road? Why not. Thanks Nike. 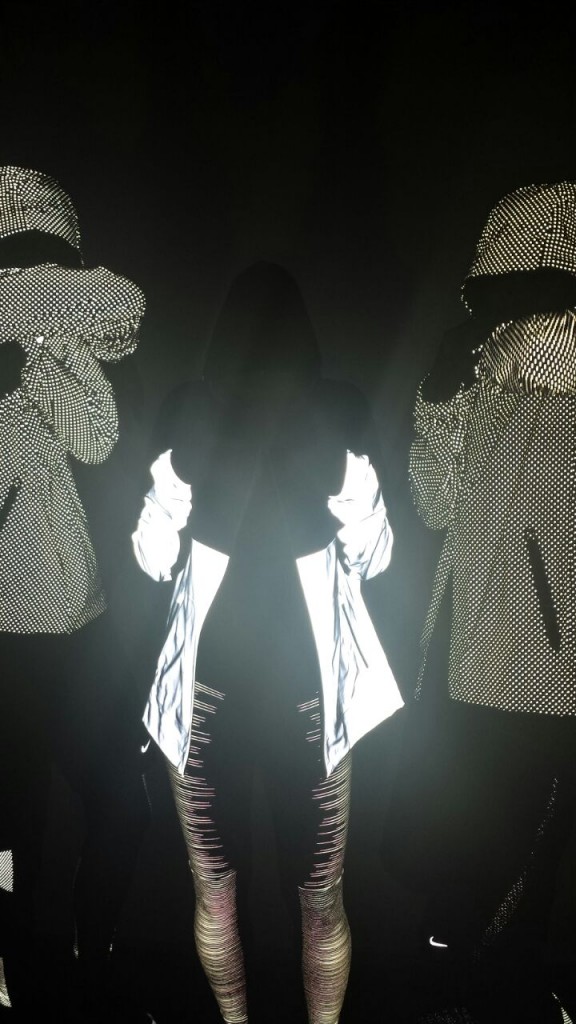