Here in New York, and probably amongst most of our global PavementBound community – spanning London, Manchester, Amsterdam and beyond – it’s safe to say that we tend to reside in the bubble of directional, product-led, trend-defining  product that Nike has created for us. That’s just the way it is. Usually there isn’t much of an argument for going against the grain there.

But back in December we heard of a new running sneaker that adidas would be putting out. The event was going to be hosted in NY, but be truly global, with international press, writers and influencers being flown in from across the world.

As a relatively new group of enthusiasts in the running space, PB was of course stoked to be invited to this event  (which took place Thursday 23rd January) in downtown Manhattan in a disused office space on iconic Wall Street. The building, No.23, was in fact the old offices and vault of J P Morgan – the well art directed vibe of disruption and anarchic revolution held fast in a setting that has truly seen its fair share of history.

But, back to the shoes – anticipation brewed in the space before a stream of adidas-sponsored athletes including Wilson Kipsang, Yohan Blake, David Villa, Sammy Watkins, ran through the venue, breaking through a paper wall that led guests in to a huge Berghain like warehouse space, complete with light show, raised catwalk and gigantic shoe box. Following a brief intro by adidas executive board-member Eric Liedtke, Apple-launch stylee, the athletes showcased not just the BOOST but a capsule collection of sharp running gear, as the shoe box slid open to reveal a wall filled with even more of the BOOST’s for closer inspection.

Don’t worry I will get to the good stuff now , but it’s important however to recognise, that for adidas, this was no regular launch. The space, the production, the art direction, the leveraging of sponsored athlete relationships, to launch  a single product. It’s a big push. And I think, personally, one in the right direction if sustained properly.

The ultra BOOST – here’s the info, as heard, seen and read, since launch

Four, maybe five ,elements make up the newness and innovation of this shoe. The science  behind the bold claims.

Enhances the Energy Return of BOOST + Adapts and stretches with the runner’s foot.

This highly elastic, snug fitting material combined with an  external heel support aid sstability and natural movement of the Achilles.

Designed to provide more Energy Return than any other foam cushioning in the running industry, with the added benefit that it doesn’t lose its cushioning properties in extreme cold and hot weather (like standard EVA midsoles do). Also makes for 20 percent more boost foam cushioning.

PrimeKnit (you’ve seen something like this before I think…)

Designed to adapt to the shape and foot’s natural expansion of each unique runner, reducing the risk of blistering 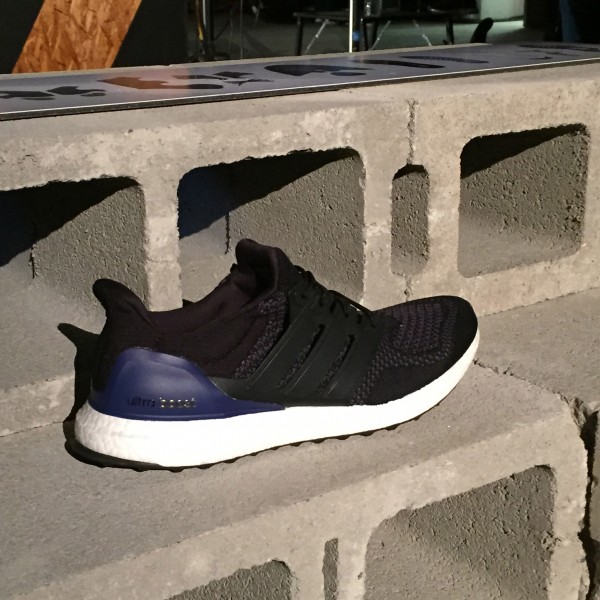 What you see above, and will hear more about, is adidas’ talk of ‘energy return’. To me, at first, this sounded somewhat hyperbolic. The science behind this though, and the work the guys in R&D have done to prove these claims and make a better running shoe – are so thorough, and so well executed, it’s difficult not to get involved and want to experience the product itself.

What stood out to me at this launch was the participation of 2014 NYC Marathon winner Wilson Kipsang, in a live trial of the shoe, as those responsible for the development of the new technology within the ultra BOOST, Angus Wardlaw (Director FUTURE Running) and James Tarrier (Senior Mechanical Engineer – adidas innovation team) talked guests through in minute detail, the individual differences between not just the Ultra and it’s predecessor, but also the leading Nike competitor style – so audacious an act, the difference in foot spread that immediately showed up on screen, as results were compared, was of course noticeable and showed that the teams behind this knew they were really on to something good. 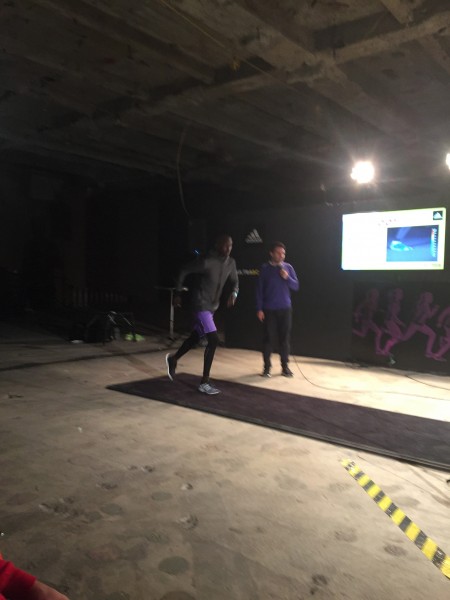 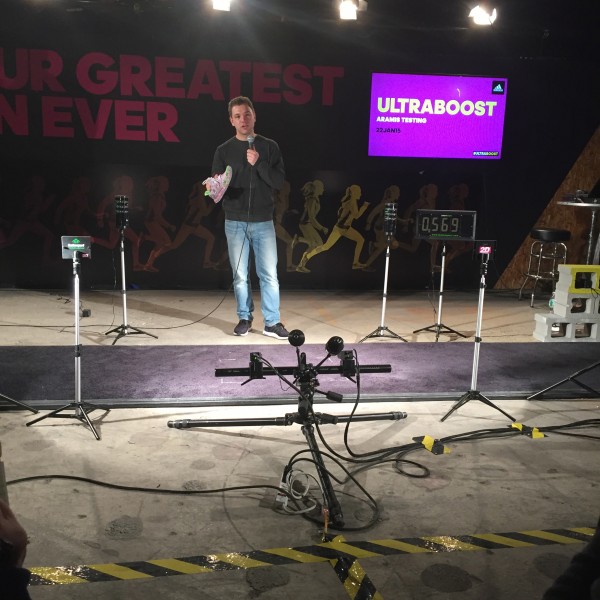 The adidas team have developed, iterated and ultimately created the BOOST  by live testing performance demonstrations using the ARAMIS 3D shape and surface measurement system. This innovative system is a technology used by institutions like NASA, Boeing and Audi to measure everything from crash tests, vibration analysis and durability studies.  This attention to detail during the design process seems to have culminated in a much more adaptable running experience – I particularly remember a comparison to  an aeroplane wheel striking the ground as it hits the tarmac and even this unscientific brain could draw the comparisons in the impact of the rubber on the runway to sole of my foot on the running track. All in all, this leads to the Ultra BOOST now being able to supposedly (excerpt from press release alert) “intuitively adjust to a runner’s stride delivering the unrivalled Energy Return of BOOST™, superior support and adaptive comfort over hundreds of kilometres, in virtually any environment”.

Again with the energy return. 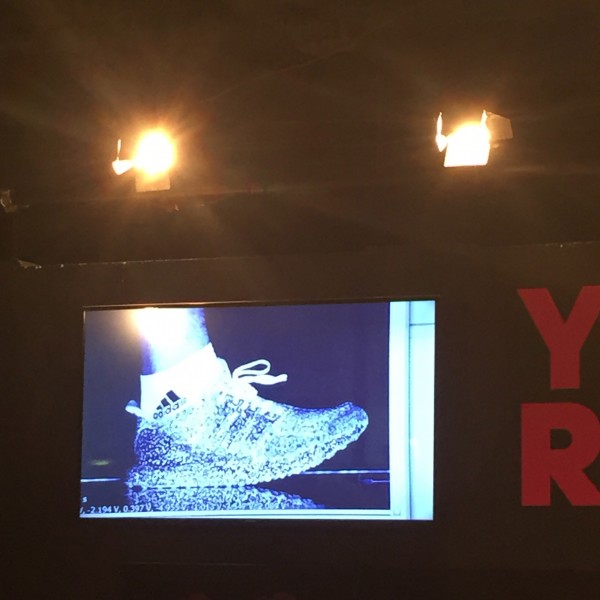 From a layman’s perspective, this took some processing – I’m not a science person, I’m barely a product person, so hearing all of this was of course one thing. It took until the next weekend to get out to a snowy but sunny Central Park to give this a road test.

Firstly – I like how it looks. Potentially this could have been a slimmer shoe like a Flyknit, and of course the most comments I received from colleagues and mates were how the upper was indicative of exactly that. But there’s a svelte sturdiness to this shoe and what’s most instantly noticeable, is that Heel Counter – much more accommodating, solid and structured. Even walking I could tell that this additional layer was going to be useful and that for Achilles protection it would be perfect.

I chose to run with a mate who was wearing the same Ultra’s as me so we could discuss the product whilst running. We stuck to a familiar 6 mile loop of the park, a few hills, a ton of other runners to dart through and some great flats to get some speed up.

What we really noticed? Exactly what energy return means to a non pro, non sneaker head, non r&d guy. The 3000 or so ‘cell’s that make up the sole, instead of the typical EVA, create a bounce like no other. I’ve never felt anything like it whilst running.

So the impact that creates the bounce is also the same momentum that naturally forces our foot to ‘spread’. The fact that this is a) enhanced by the primeknit and b) harnessed by the stretch web outsole, literally means that the bounce you put in, gives the energy back, Imagine as your foot strikes the ground as you run, it either stays there momentarily (no bounce/less bounce), or helps you lift the foot more quickly (more bounce, err, Ultrabounce?).

This momentum was felt across 6 miles, up hill, down hill, sprint finish, the lot. We also got a great run in along 1/4 of the path around the frozen reservoir in Central Park – this was icy as fuck and the grip on the outsole, plus the extra springiness, meant I was flying, not stumbling – an added bonus. 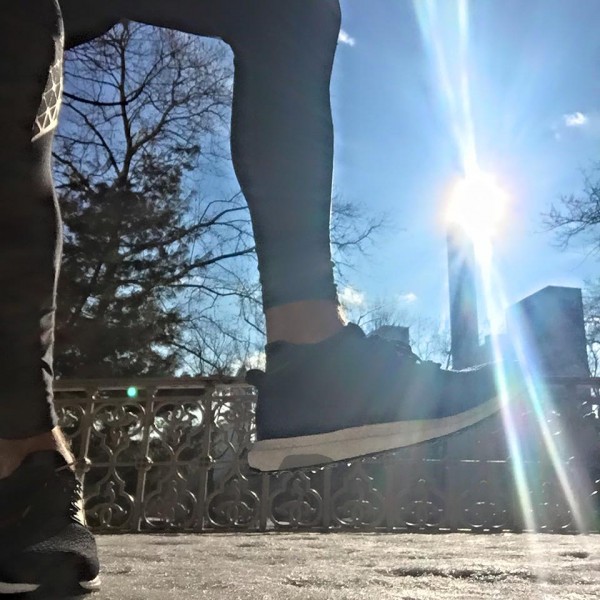 What next? Grab a pair for yourself and find out more on www.adidas.com/ultraboost.com

The adidas Ultra BOOST will be available at adidas.com from February 11, 2015, MSRP is $180/€180 and adidas Sport Performance stores and select retailers from February 25.