Alright ch’ yall, we have something really special for you all. Vol .3 in the Pavement Bound mix series comes from the super “feeeels” of Brooklyn’s Chances With Wolves. Just in time for the AirBnB Brooklyn Half Marathon this weekend. Good luck to all participants tomorrow.

Chances with Wolves are Kenan Juska and Kray two Brooklyn based artists whose Chances With Wolves “radio” show broke the standard of “genre’s and played on vibes, mood, deep deep digging in the crates and the world of weird.

Chances With Wolves’ mission is to create “the most hauntingly beautiful radio show ever. 300 episodes in and as far as I can see there’s no bottom to the well of weird, human creativity. It’s infinite,” said Juska.

More than just a cool DJ guy from Brooklyn, Kenan is also a renowned found material collage artist as well.

In 2014 he launched “Daily Operation” a 500+ piece exhibit of collages made entirely out of found objects. 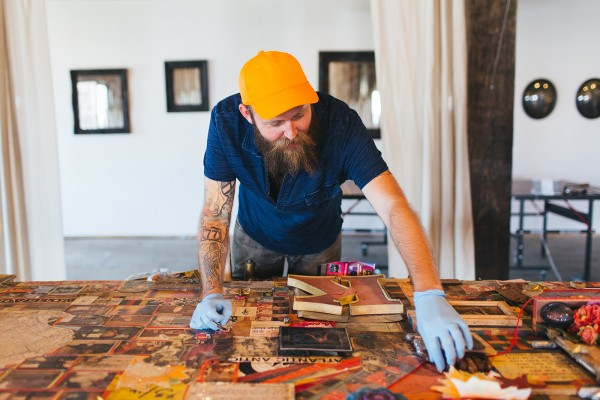 Kenan sat with us to discuss his relationship with running as he is gonna smash out the Brooklyn Half Marathon himself. Good luck Kenan!

How did you start running, any story behind it and where you are now?

Well, my father was a runner. I grew up with running as part of my life through him. I ran a bit in high school, but I stopped. I tried other stuff to stay in shape over the years, I used bike a lot, but I could never get into going to the gym (I hate exercising inside); so I started running about two years now, and I’m not sure why but this time it really took. I’ve run a couple half marathons as well as a bunch of shorter races and I’m hoping to run to NYC full marathon this fall.

What’s the running culture like in your city?
It’s crazy. There’s so many runners… It’s kind of a funny question though because I primarily train alone, and it’s a very solitary thing for me, but you see so many people while you’re out, and when you go to races there’s so much energy. It’s pretty amazing.

What gets you amped to run? What helps you push through those harder moments?

Having kids has really changed my whole perspective on everything. I had twin boys in May, and almost subconsciously they have become a huge motivating factor for me. It’s like when it’s starting to hurt and I feel like I just want to stop running, I think about the kind of example are I want to set for them about following through on things, and finding inner strength and finishing what you start, and that really pushes me through. Also, the faster I run the sooner I get back home to them.

Does being creative have any impact on the way you approach running and your crew?

What kind of music do you like to run to? Your own, stuff you don’t play or dj with?

It really depends. I love listening to the old Chances With Wolves radio shows because often times I’ve forgotten about to some of the music that we played and it brings that stuff back for me. We’re over 300 episodes in, so there’s a lot of content.

But also it depends where I’m at in my own training. When I am in good shape and feeling really strong I listen to more free jazz and spiritual stuff, Leon Thomas, Sun Ra, Pharoah Sanders, John Coltrane; but that really only works well for me when my body and mind are feeling right and I’m really able to let go and use the run is sort of a meditative experience.

More often I just need stuff that’s kinda upbeat and familiar, but even then I always like to keep it soulful.

What do you think makes for a really good running mix?

I think that’s a really personal question. Like what might work really well for me may not work for someone else… But I want to put something together for you guys and hope that other people can dig it. I always like mixes that I have an ark to them. Some ebbs and flows, highs and lows, if you know what I mean, but feel like they have a start and the finish and a progression as you listen.

Any particular tracks on this mix that you think are going to make people fly?
UNDERDOG -Sly and the Family Stone
So hard!

Chances With Wolves have put together a beautiful slow building two-hour mix as an homage to Brooklyn life. The get-up-early on a Spring day vibes and cat-calls on Fulton St. before you hop the A Train. A sunny afternoon with wine in Ft. Greene park – or a long happy run through Prospect Park…and then some. We hope you enjoy!

Also check out Vol. 1 and 2 in the Pavement Bound Mix Series on our Mixcloud.