After a quick run through central London last week, along the Southbank to Westminster, I was able to sit down with Nike NYC Photographers and members of Black Roses NYC Fred Goris and Sean Henry Lee. 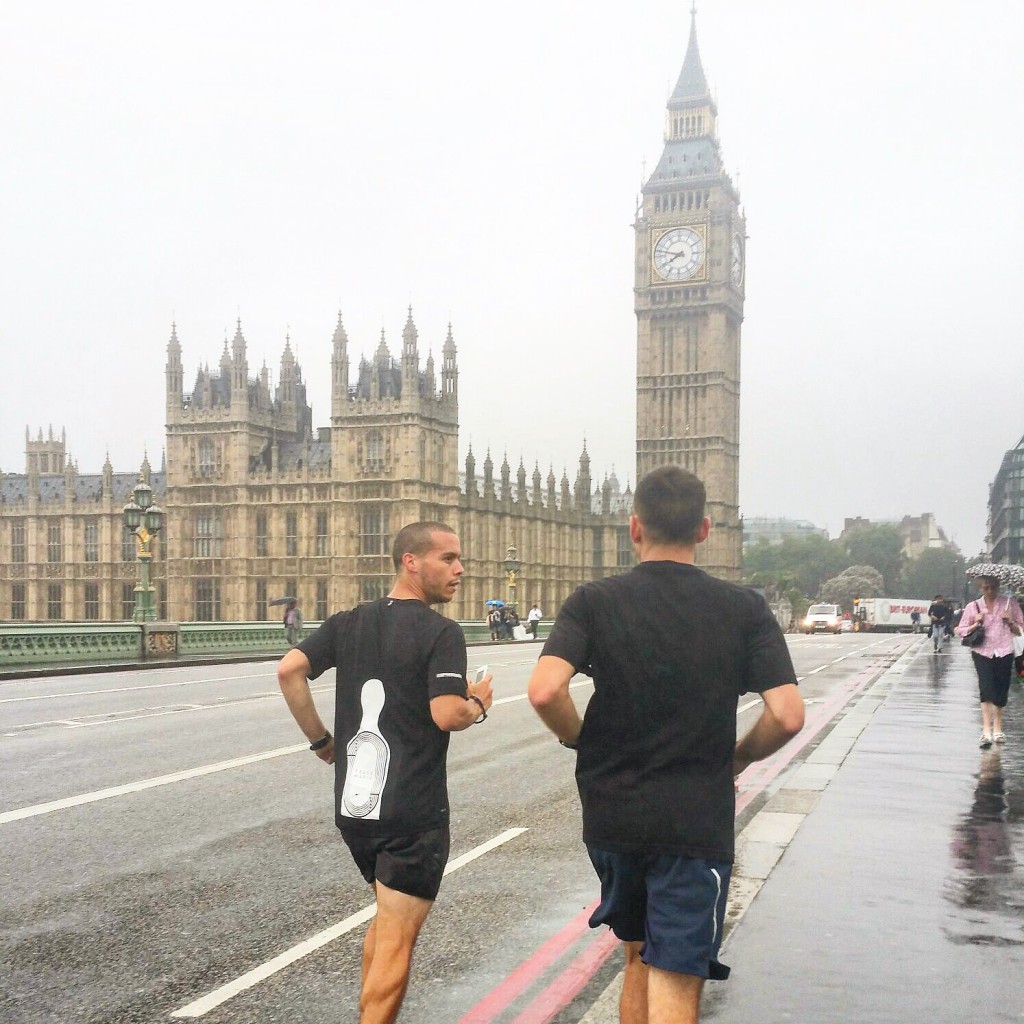 So what brings you guys to London?

S: We met Sorrell from Run Dem Crew when she was over in New York last year and followed the WMN RUN 100 story and we both really wanted to come over here to capture the story of the weekend at Race to the Stones.

After being in London a few days and going on a few runs here, can you see any big differences between what’s done over here and what you guys do in New York?

S: The energy from the people is universal. There’s tighter spaces in London compared to New York which makes moving around with such a huge group difficult here. It’s good that people can aim to progress through different groups and it’s good to have an aim to move up in groups.

Both you are pretty quick (both have ran 1:18 half marathons), what kind of training do you do?

F: In order to achieve the times we’ve got, we have to train consistently, sometimes on our own. I live a few blocks away from Sean and we’re at the same level ability wise so it’s easy to arrange runs, lace up and get out together.

S: With Black Roses NYC we do group track and tempo workouts at least once a week. Different people in the crew are training for different distances or events so we each do appropriate workouts.

In 2013, having never ran a marathon but having ran some half marathons, we started training seriously to try and qualify for Boston marathon. When we started training, friends would come out and join us on bikes to support and we both felt like people really believed in us. We didn’t have a set training plan but we knew we had to run a lot.

F: We decided to do a relatively small marathon (Lehigh Valley Marathon) to try and qualify for Boston. The field is only around 2000, there’s no prize money for the winner but its well known in the States for being a good PB course. It’s also purposely arranged on the final day of Boston qualification. It was the first year after the Boston bombings and we both felt like we just had to be there and be part of it.

S: Some of the route was trail and it was only possible to run in single file which made it even more challenging. We were really grateful for some of the more experienced runners in the field helping to pace us. Logistically it’s a hard race, there isn’t much support, it’s September, towards the end of summer so it was around 70 degrees. We both finished in 2:59, around 20 seconds apart. We both qualified. People thought it was the perfect marathon but we really struggled. 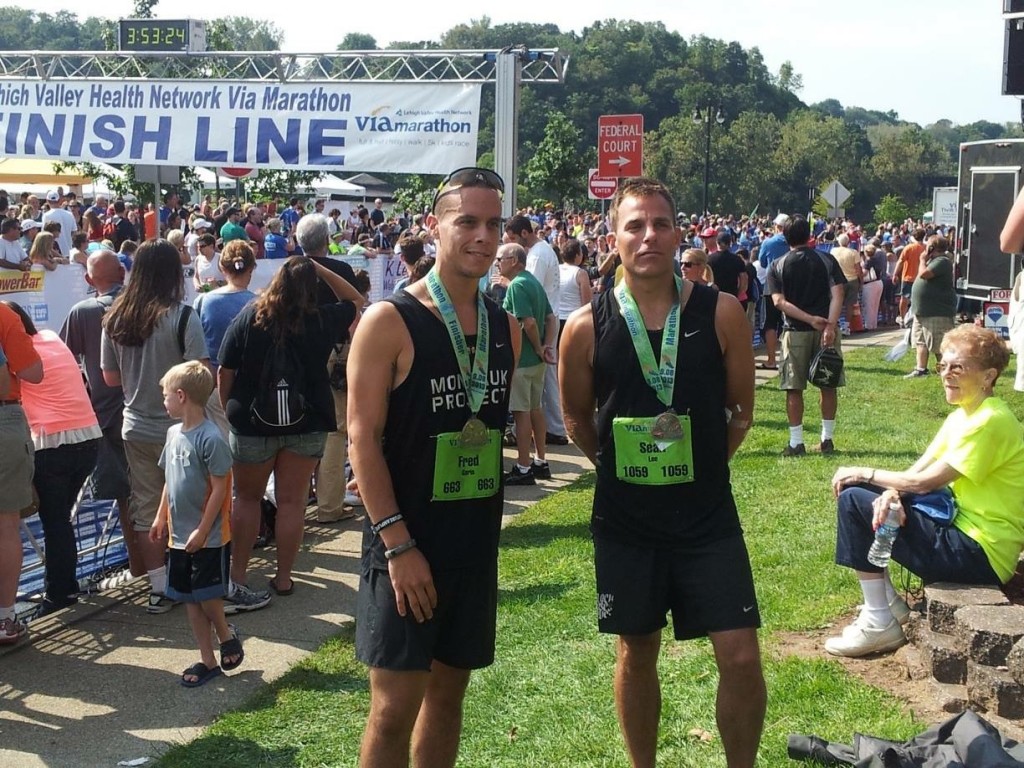 As photographers for Nike NYC, I imagine you have to be on your feet and pretty active when you’re shooting. Does that affect your training?

F: When I first started shooting and running the balance was really hard. It affected my training and really showed in my race results. Finding balance between work and training is still my biggest challenge. I have two big races at the end of the year and I know if I really want to do well then I have to find the time to train for them.

People run for a variety of different reasons. Why do you run? What motivates you?

F: I first started running with the Bridge Runners just after the first Bridge the Gap in Berlin. Once I started to run, I wanted to challenge myself and run faster. I felt motivated to train. I really enjoyed the social side of running with a crew and I saw it as a great chance to travel more too. The next BTG in Amsterdam soon came around and I think I was the first person to sign up without really knowing anyone. The people I’ve met through running have opened a lot of doors for me and got me to where I am now.

S: I started with the Bridge Runners too. I always liked to be active, I ran occasionally at the weekends and a friend told me about the Bridge Runners. I knew running with other people would encourage me to run more and I found a better the balance with the running and lifestyle in New York.

With running, you can quickly and easily see your progress and over time I became more and more interested in elite athletes, looking at what they did differently and how they trained to stay at that level.

F: When you first start running and then start racing, you’re taking minutes off your PB’s but eventually it becomes seconds. Sometimes it can be hard to mentally get back on the horse if you haven’t hit the time you wanted and you’re disappointed with your time. It’s the community that keeps you going.

You mentioned training in Mexico. What was that like?

S: Knox Robinson invited us to join him down there for altitude training. We were training with workouts twice a day at 9000ft for around 28 days. Running around 100 miles a week consistently for the first time in our lives. We ran out from where we were staying and the first half mile was all uphill. We ran when we arrived and on that first night I didn’t think I’d make it up that hill.

F: We did atleast 10 miles every morning. Running through fields with donkeys and stray dogs, it was a humbling experience.

S: It’s was 90-95 degrees in the day but freezing cold at night. We had a pretty basic setup, sleeping on mats on the floor, shut off to the world with only one reason for being there. We ate well, local fresh fruit, vegetables and eggs from the market. When we weren’t running, we’d watch old marathon tapes together.

F: We stayed in the grounds of a house owned by Germán “Wrong Way” Silva too. Mexican’s dominated the late 90’s marathons and during the ‘94 New York City Marathon, after leading, Germán took a wrong turn with less than a mile to go. He was taken over and put in second place but he managed to turn around, catch up and ended up winning the race by 2 seconds.

What are you running goals?

F: We’d both like to run all the majors.

S: We started running with goals but now I think less about races and more about experiences.

Talking about majors and experiences, what was it like to run Boston Marathon in 2014, the year after the bombings?

F: The first 3 miles are residential, people were out there in their driveways supporting and cheering. After the crowds and supporters were 4 or 5 people deep the whole way round. There was so much noise, it was so overwhelming. We ran together and could hardly hear each other speak.

S: We started off too fast on the downhill at the start. Towards the end, I was really suffering but I made myself take it in because I could feel how special it was. We almost feel a little spoilt from the experience.

F: It was hot and by the end I was really cramping. I ran alongside the railings where the bomb went off and ended up finishing with an 8 minute PR.

We went out to Boston a few months beforehand to familiarise ourselves with the city and the route. That really helped when the race came around. There was a lot of social media around the #BostonStrong and it was the first indication I got of how strong and wide reaching the running community was and how we were all connected through running.