The Red Bull Wings for Life World Run is a global running and wheelchair race, held simultaneously at 11 am UTC on May 3, 2015.

In each of the locations the race follows the same format, a Catcher Car starts to chase down competitors 30 minutes after the race starts. All cars then speed up in unison until everyone is caught. The UK edition of the race was to start at Silverstone race track with the chaser car driven by former Formula One world champion David Coulthard.

For the winners, the reward is substantial. The male and female global champions winning a round-the-world trip and each race locations male and female “national champion” winning entry to the race in any location the following year.

Wings for Life who organise the race are a not-for-profit organisation that fund research into finding a cure for spinal cord injury. Red Bull themselves, the primary sponsor for this event , cover all administration costs of the organisation and 100% of the Wings for Life World Run proceeds (entry fees, donations and sponsorship funds) go to the foundation. 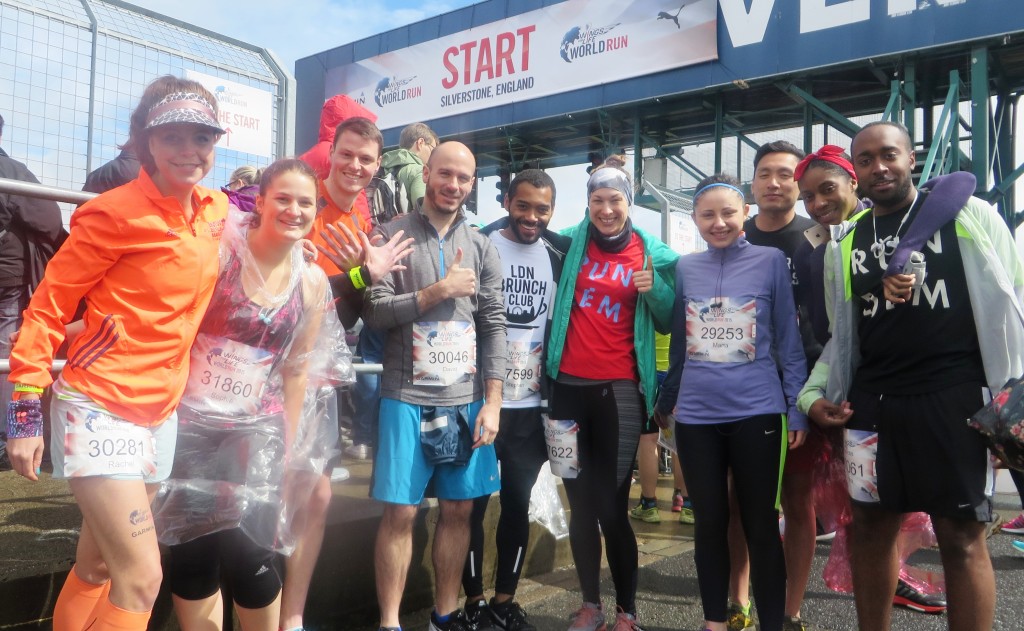 A total of 101,280 runners registered for this second edition of the Wings for Life World Run. The simultaneous worldwide start at meant it was night-time in several of the race locations and in India those taking part had to do so in the mid-day heat with temperatures of 33 degrees.

The UK race itself was a little more bearable, and started promptly with a big screen showing the start lines in some of the other race locations. It was great to be able to see others lining up at night and at sunrise across the world,  this really emphasised that this was a global race with thousands taking part.

Not being a big F1 fan, I didn’t particularly enjoy the loops around the Silverstone track but I can see why some did and the course certainly got a lot more interesting (and pleasurable) once it left the track and headed through the Silverstone village and surrounding country side. The ‘undulating’ course (hilly in laymen’s terms) was challenging and a welcome change from the generally flat roads and streets of London. There were energy stations every few Km’s providing water, red bull and a red bull/water mixture as well as bananas and oranges. Due to this race being only 1 week after London Marathon, I knew in advance I would be stopping somewhere around the 10-12km mark whether or not the chaser car had caught me by then or not. After passing the runner return bus stop at the 10km mark I continued onto the 14km mark where the next bus stop was and not long after stopping I was passed by David Coulthard in the chaser car which signalled my race was over.

Each runner’s bib contains a transmitter that is activated when you run passed the start line, this then logs your distance when the Catcher Car passes you. The UK race was won by Kate Carter who was caught after running 34.73km in 2 hours 39 minutes and Tom Payn who ran an immense 61.09km in 4 hours 10 minutes, coming 23rd overall man in the World table. Ethiopia’s Lemawork Ketema retained his Men’s Wings for Life World title in Austria (breaking his own 2014 record of 78.57km in the process and running 79.9km). In Japan, Yuuko Watanabe was crowned 2015 Wings for Life World Run Female Global Champion running 56.33km in Takashima.

Unfortunately for some reason my transmitter failed to work so I have no recorded time, country or global ranking for the race. Luckily enough though I do have some photographic proof I made it to the 14km mark. 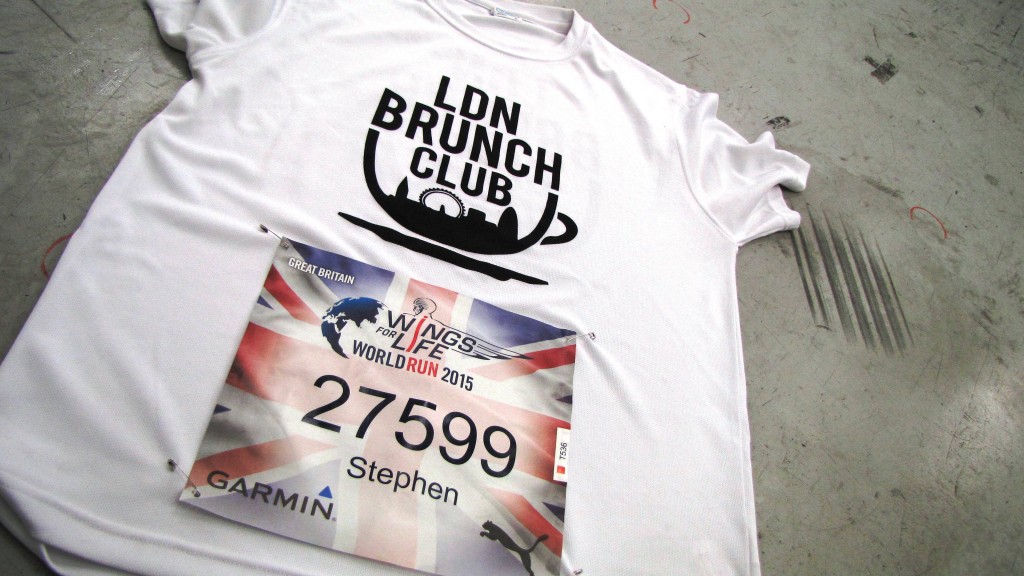 The Wings for Life 2015 World Run rose over €4.2 million for spinal cord research. The UK race was well organised and it was a great opportunity to be part of a global race for the first time. Although each location would have been different: different course, conditions (weather, temperature, time of day) having this as a global race really added an extra dynamic to the race. The route in the UK went on for more than 80km and I can imagine a great deal of time and effort went into organising the route and road closures and also ensuring regular bus stops along the course, for those who had been eliminated from the race to get back to Silverstone as quickly as possible even if they had finished running miles away from where they had started. Each participant received a medal, technical tshirt, sweatband and a Wings for Life micro-towel. This was far more than I expected to receive for what was effectively a charity organised race. Not to mention the unlimited free Singha beers in the post-race lounge which were available to all who took part. Definitely a race I’d recommend and consider doing again, next time hopefully I’ll be able to race the chaser car properly. 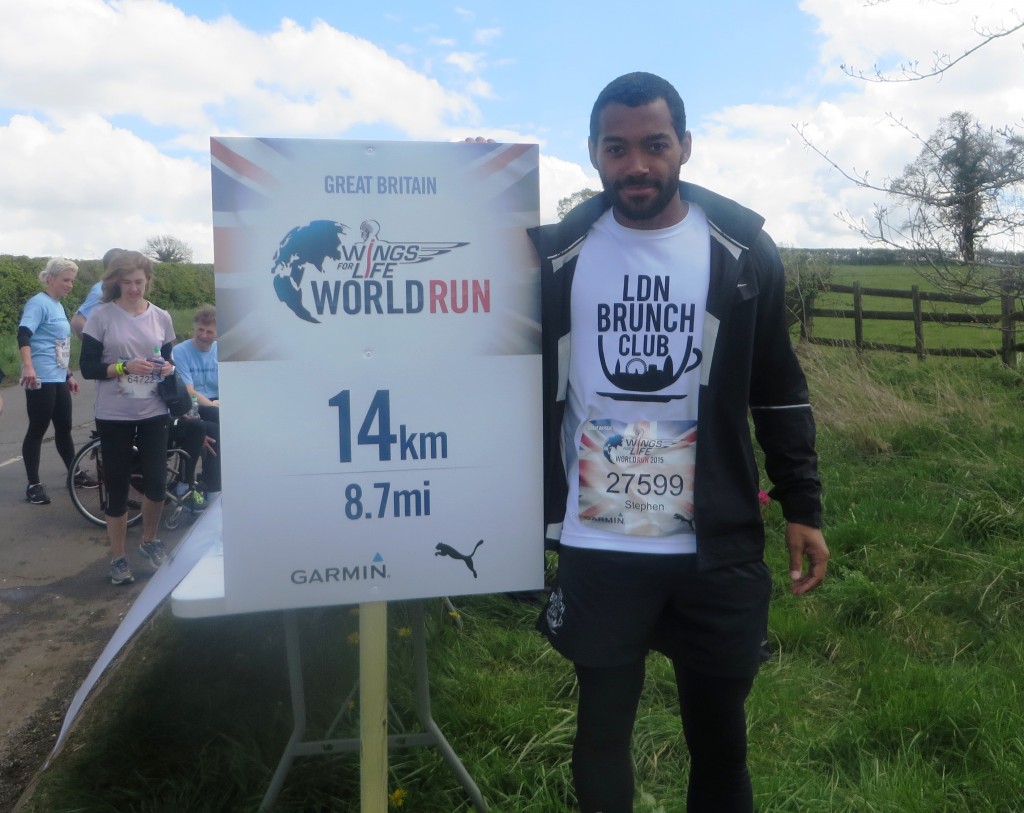 Huge thank you to Fred Butler and Nina Scott at Red Bull for organising our race entry and pre and post-race transport.