In the spirit of all things Running Crew-based, we wanted to delve a little further in to the minds of those behind the crews – where better to start with Joe DiNoto of New York’s Orchard Street Runners.

In-between leading OSR’s Tuesday evening runs, corresponding with runners from around the world, and hanging out on Orchard Street with the neighborhood family (in an increasingly cold, wet New York) Joe gave up some time to give us a little insight in to the mechanics of conceiving, and running, one the leading running crews in New York City.

I knew from Joe that, amidst the swirl of infamy and growing interest in both emergent and established running groups across the US and the world, there were also a few misconceptions surrounding crew life. So, to clear some of that up, and demystify some of the dark arts of night running we got Joe to explain in his own words.

Joe DiNoto / OSR: The most common misconception about running crews is that all crews are the same. With the growth in running’s popularity over the last couple of years there have been many new groups springing up all over the city, and the world. Each of these groups offers a different type of run and social element. This is great for both individuals and organizers. The more options there are in types of group runs, the more opportunity an individual has to find a group run that fits their expectations.

OSR: Everything changes. NYC at night has a different energy than the daytime. Your senses are heightened. It is something you feel instantaneously as soon as you start running the street running with 30 other people. Pedestrian traffic decreases at night, you can become invisible, unnoticed. You can slip in between traffic; cross several lanes; go from street to sidewalk. You have a different level of control and freedom. Things become more dangerous, and therefore, more exciting; and as a result you just run faster. 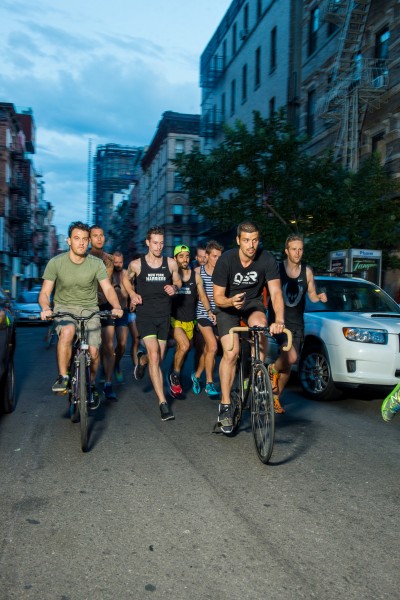 PB: For the uninitiated, what is the difference between a running club and a ‘crew’, or is it all the same?

OSR: This is subjective, but both terms “group” and “crew” seem to be interchangeable. They are used to refer to a collective of people that relate to each other and, for one reason or another, choose to distinguish themselves from other people. This could be based on any variables including geography, running intensity, social interactions etc.

PB: To get a little more granular, what helps identify OSR uniquely, compared to other crews out there, either locally here in NYC, or internationally?

OSR: I think what makes OSR different are the events & races we put on, and the effect that they have had on our Tuesday Night runs. Take the Midnight Half, its purpose was to take the fastest people among us – from all different crews – and put them up against each other in an urban, night race. This crew vs. crew mentality permeated into the weekly runs, which had already been known as very fast continuous threshold runs. Our Tuesday Nights are like mini-races every week now. Representatives from all local, and sometimes international running groups show up and go at it. It all kind of happens on its own. I provide course info and basic pace groups ahead of time, allowing individuals to equip themselves with the route. There is no waiting around for each other along the way so if you get separated and don’t know the route, it’s your own fault. The intensity and pre-loaded knowledge of where you are going creates a faster running dynamic, that I think is unique to OSR.

From personal experience, (finally) turning up one Tuesday night, I felt that something like OSR, felt a little daunting. Built upon a foundation of being purposefully intimidating. Even the name, seemed to call out ‘cool, Lower East Side, expert runners only. And woe betide you if you aren’t one of us. There is, of course, a naturally runners who are head and shoulders above the rest, however the reality of my first meet with OSR was quite different from my expectation. The moment I stepped up to Lost Weekend, there was Joe; huge smile, hand out stretched and ready to introduce me to anyone nearby – something I’ve noticed him do with every starter since.

PB: You’re a friendly guy (!) Is that what people expect when they rock up to Lost Weekend? I didn’t. How do you make first timers feel at ease?

OSR: I don’t know what people expect. Our reputation intimidates a lot of people, so if someone is there to run for the first time chances are they are looking for a challenge, so I show them that respect. I do my best to greet people and introduce them to the veterans – I want them to know that this is my thing – because I love it so much.

Running through New York City, at any time of day, can seem like one of the best things you can do for free anywhere in the world, especially as you are running – the bridges, the river, the weather, the buildings … all of which take on a different vibe from when you are walking, or in a cab. Couple that with the added stimulation of running alongside a couple of other like minded individuals, or what can end up being a whole crew of 40 or more, and you have a somewhat magic equation – Joe gives his run down on what makes this work;

OSR:1. The speed, the pack has its own energy that you can draw from to push yourself harder.
2. The power you have as a group through the streets, safety in numbers.
3. Sharing the pain of endurance running, if I see someone else not giving up I am less likely to myself.
4. Sharing the rewards of endurance running, being able to talk about it afterwards with someone who knows, someone who was there with you.
5. I love watching an individual go from being scared to run with OSR, to dropping 2 minutes off their mile pace as a result of trying to keep up with us.

PB: There’s an element of the subversive, and to use your own term, ‘unsanctioned’ to OSR; suspending the ‘rules’ of the road/world around us – I feel there is something poetic in the notion of our senses being freed up and let loose; it’s seemingly impossible to think of this run without throwing out words like dangerous and anarchic.

OSR: All of a sudden, for some reason, when you’re running through the streets at night you don’t have to listen to any rules anymore. You’re not driving a car or riding a bike. You can blow through a red light, you can go the wrong way down a one-way street; you can transition from sidewalk to the street and back again. No one sees you if you’re doing it right. You are invisible and in control. The choice to put yourself in harms way for the sake of not stopping is your own, but it is a lot of fun.

PB: Running, alongside Health, wellbeing, fitness, athleisure, have all taken a front seat in the mainstream consciousness throughout 2014 and doubtless into 2015 too – How do the subversive, non regulated elements of OSR fuse with a growing interest from the more main stream media, and big business?

OSR: If you don’t fuse with financial partners, big brands and companies who are looking to get involved, you can retain complete creative control over everything you do. If your vision is based in passion, that passion will be the element that draws in a following. That following brings with it something money can’t buy, and that is where success is found. I’m not saying big business doesn’t bring positive attributes with it, I am just saying if you have a vision, and you are able to carry it out as you imagined it – sometimes it’s worth more than the involvement of the big boys. With that said, the big boys have contributed many positive things to the urban running community, helping it grow, which inadvertently has helped small operations like mine to grow.

PB: One of the most magnetic and well known facets of OSR is the Midnight Half you initiated in 2012 – what was the idea behind it and how has it progressed since then?

OSR: The idea was to see who was the best urban runner. In order to win this race you need speed, endurance, street knowledge and a bit of risk taking, you can’t say that about any other foot-race in the world. It has progressed, as its reach has grown it has attracted faster runners, more competitive runners – and more spectators. This growth has made it more fun to put on for (both) my partner in the race, David Trimble (of Trimble Racing) and I. 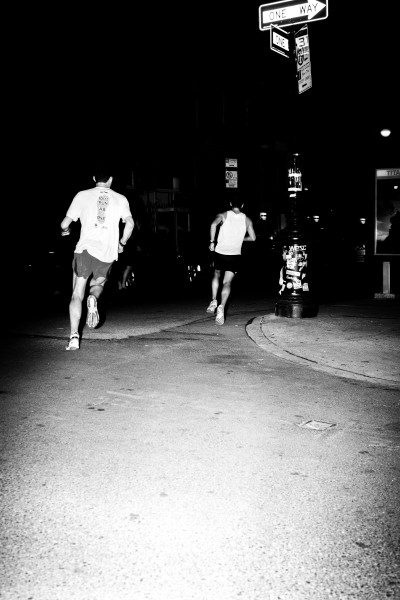 PB: The PB team and our readers, like most runners, are obsessive about the gear – can you tell us your absolute favorite piece of running kit?

OSR: Right now its my neck warmer. It’s the most versatile piece of kit for winter running. I switch it to cover neck, or ears, head, etc. as needed.

PB: To me, Orchard Street Runners couldn’t and wouldn’t be the same without the integration of bridges – they make the sky line what it is, provide variation in elevation, ascent, descent, strength, speed and running style – as the bridges do figure hugely on OSR runs around lower Manhattan and BK, do you have a favorite?

OSR: My favorite strip of bridge to run is the descent down the Manhattan Bridge as you’re coming back from Brooklyn. We usually hit this portion returning to the LES from a long run. Feels like flying, having gravity on your side after 9 miles. 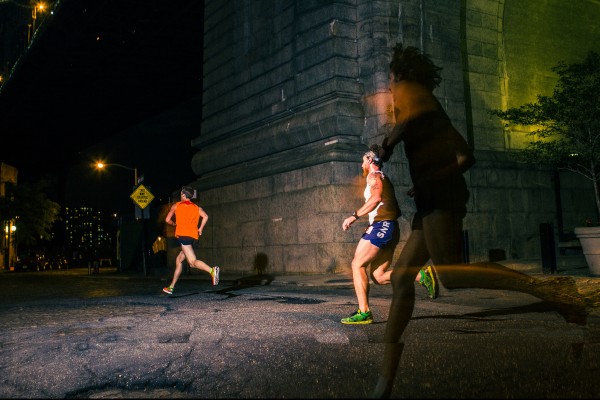 Anyone interested in finding out more can check out our own Crew Profile of OSR for more information, or check OSR instagram – Monday’s posts usually include the next day’s route – miss these at your peril.

Below is an  example route of an “OSR Tuesday Night Run: +-9mi, Flat – Midtown Route”

Pavement Bound would also love to introduce you to the wonders of OSR’s own website and Joe’s personal blog were even more info can be found.