The annual Hood To Coast Relay is an overnight, long-distance relay race. It is one of the longest and largest relays in the world, and on the “bucket list” for many a runner. The course runs approximately 320 km (200 mi) from Timberline Lodge on the slopes of Mount Hood, through the Portland metropolitan area, and over the Oregon Coast Range to the beach town of ‘Seaside’ on the Oregon Coast.

In less than nine days several Pavement Bound’rs are going to be making their way to Portland, Oregon for the legendary Hood 2 Coast race 2015. GOOD LUCK GUYS, MAKE US PROUD!

CL: A little over a year ago I quit my job, got married, said goodbye to my friends and moved across the country. All within the span of ten days. After a decade in New York, my wife and I decided it was time to head elsewhere for all of the reasons that everyone leaves New York. We made a game of it and for over a year we took trips to cities that we thought might be suitable for the next phase of our life. Eventually it came down to Amsterdam and Portland and after a few lists were made and deals struck, Portland narrowly won out.

A month after arriving I was offered a job at an agency and started working. At the start of my second week, one of the partners looked up from his keyboard and asked out of nowhere if I ran. I told him that I did. How fast, he’s asked? Having not regularly run with a watch, I guessed at an average mile pace of 7-8 minutes. Three weeks later I was in a van at dawn driving towards Mt. Hood preparing myself to run farther than I had ever run.

Hood to Coast, a 12-person per team relay race, covers 200 miles between Mt. Hood and the town of Seaside. I hadn’t run a race since the 6th grade marathon. My total distance to cover would be roughly 16 miles. The catch: those 16 miles would come over the span of 24 hours in three sections, between which there would be large chunks of time to cram in a van with 6 other sweaty humans in various states of rest and recovery. Needless to say I had never done anything like this before.

As a good friend pointed out to me recently, running for me is a “solo monastic pursuit.” I very rarely run with other people, don’t normally time my runs and mostly do it for its psychological benefits. Before H2C I had never felt competitive about running. Yes, I was happy to have a run where I felt good, went fast, and didn’t hurt too much afterwards. But that all changed shortly after I jumped in the van. The air in there was familiar in a way that I couldn’t place until we reached the first checkpoint, where it dawned on me: for the first time in years I was part of a team. I had spent my entire youth on teams playing competitive sports and this familiarity triggered something in me that was absolutely unexpected and simultaneously exhilarating. Another bit of helpful motivation was the concept of “roadkill.” As our team lead explained on the way out to the mountain, roadkill was any runner in front of you. With a staggered start, you were virtually guaranteed to have roadkill ahead of you at all times. Each person you passed was another notch in your belt to be tallied at the end of each leg.

When it was time to run my first stretch, I waited anxiously at the checkpoint for my teammate to arrive. It was 90 degrees in the late afternoon and my 4.5 mile leg would be run in full sun. I was nervous about the run, nervous about the conditions and, most of all, nervous that I would let down my team if I didn’t run well. All of these nerves vanished as soon as I took my first step. All I did was run. Fast. Everyone in front of me was roadkill and I pushed hard to chalk up a healthy body count. It was hot as hell and I was stripping clothing off with each mile, but still coasting on adrenaline and feeling no pain. As I neared the relay point I started looking for my teammates and that got me going even faster, knowing they were there waiting. The only problem: they weren’t there. Apparently I ran a lot faster than I had projected and they were still in the parking area, slowly making their way to the checkpoint. A minute later they arrived and the next runner in line was off like a shot and I crammed back in the van.

The van was a strange and wonderful place. It was stinky and crowded, but full of laughs and good mixes that kept us all in the right frame of mind. At every checkpoint the whole team would be out of the van waiting for the incoming runner, and every runner got that burst of energy for the final push from seeing the team at the end of the line. On longer legs we would pull the van over to the side of the road, away from the crowds, get on the roof, blast a boom box, spray paint the road and wait until we saw our guy coming at us. On these stops we would also tally up our roadkill, hatching them out on the back of the van like a WWII flying ace. Halfway through we were already onto the second door on the back of the van. 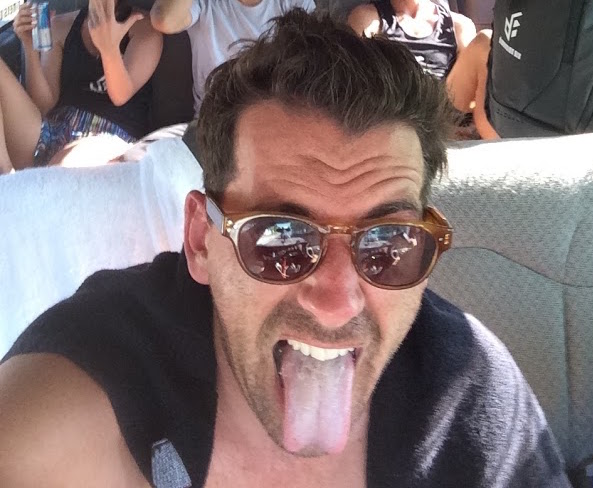 Hours later came the night runs. Some of my team ran through dirt trails and clouds of dust. Others through sleepy Willamette Valley towns. My leg was on a road, in the middle of nowhere. Cliffs to one side, forest on the other. Nothing but black sky up above. After leaving the handoff point in close proximity to a handful of other runners, I was soon on my own. No headphones, no watch, no iPhone. Just me and my breath and feet falling on the pavement. The bounce of my headlamp eerily leading the way. It was a run that I will remember for the rest of my life. The beauty of Oregon and the silence of the empty road. At the time I didn’t realize it, but it is the closest I have ever come to meditation. My footfall and breathing became a mantra and they carried me through my miles timelessly. I could have been running for 4 hours or 4 minutes. As I came around a bend towards the end of the leg, the forest gave way to wide open sky and the road ahead lit up with moonlight. For this period and this period alone, I forgot about the competition and was just floating as fast as my body could float. Near the relay point artificial lights became visible and I was jerked back into the reality of where I was running and what I was running for. Knowing my teammates were waiting up ahead, an extra bit of fire sparked in my legs and I sprinted down the empty road into the arms of my waiting team.

My last leg came later that same morning. It was light out and the field was crowded again. Our team was making great time and I was the second to last runner before we reached the finish line. This was my longest leg of the trip and also the roughest for many obvious reasons:fatigue, no sleep, no real food, gravel road, 7 miles. The start was good and the roadkill plentiful. My bloodlust was the main thing keeping the legs churning and this continued for the first few miles. Then I was alone again, on a gravel bike trail under huge electrical wires and grey skies. I felt my energy fading. And then it happened. I got passed. It was the first time someone had passed me in 22 hours. She came out of nowhere and crushed by me like she had just jumped out of the van. It was a punch to the gut, but it also reignited my competitive spirit. Could roadkill be revived if they overtake the one who made them roadkill? I stayed with her, right on her heels all the way through the end, but never passed her. When we were 100 yards from the handoff we both kicked into a sprint. It wasn’t for each other; it was for our teammates who we both knew were waiting, mere miles from the beach.

The rest of the day is a bit of a blur sitting here a year later. We crossed the finish line together. Drank one of the best beers of my life together. Jumped into the frigid Pacific Ocean together. Eventually crammed ourselves back in the van together and a few hours later, after a shower and some foot maintenance, ate together. It was a surreal feeling when we finished dinner. We had formed a bond over the past two days that seemed unbreakable and yet since that evening I have rarely spoken to any of them. Teammates for a weekend.

The race itself was a success and the competition was something that I thrived on. I haven’t run in a race since then and am not sure if I will again. Racing is something that appeals to a certain part of me, but I run to find that place between the cliffs and the forest at 2am. Roadkill is great for a weekend. Empty roads are good for a lifetime.